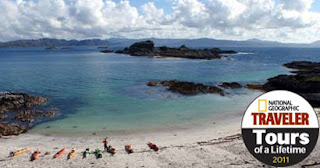 National Geographic has listed The Scottish Sea Kayak Trail among the 'Top 50 Tours of a Lifetime" (3rd on list).
Apparently, it's also in Outside Magazine's coveted 'Travel Hot List for 2011', although I couldn't find it.
Which is nice. Sort of...
I wrote the guidebook partly because I knew that if I didn't, someone else would, and there was a trend for guidebooks to recommend campsite locations. Directing kayakers to certain campsites, along the length of Scotland's west coast, would concentrate environmental impact in those places and potentially damage them.
So as well as making a great fuss about campcraft and minimum impact techniques, in my book I pointedly recommend no places to camp. I hope to spread the impact along the whole coast as well as leaving kayakers free to find their own adventure.
Perhaps it's big-headed of me, but I also hoped similar guidebooks would adopt this policy in future.
I have been in touch with Wilderness Scotland, the outfitter offering holidays along the route of the trail, and it seems what they're offering is quite different to the self-guided route I suggest.
I also discussed ith with Franco, publisher of Pesda Press, who said, "Shame they didn't mention your book".
Posted Thursday, May 19, 2011

It's an interesting idea - the not listing campsites - as I plan for my Alaska trip. In Alaska one of the big concerns is, because of the topography you cant always get off the water. So I would sleep easier, and plan the route easier if there were good resources for campsites.

You could also argue - as LNT does - that when you know there are going to be a lot of campers it is better to focus campsite impacts in one place instead of spreading them out.

But I guess it's a judgement call as to how many is 'a lot'.

I toyed with creating a guide book - with camping info - for the route I am doing. But I will admit you have me thinking. I may wait and see how hard it is to find camp sites, as there is a safety factor as well.

thanks for making me think this early..

Alaska - wow, rather different to here. So many different considerations, including (of course) bears, who will quickly learn where campers congregate.

I took my lesson from the official guidebooks to the Pacific Crest Trail. While they mention water sources (for the deserts), they never once mention where to camp, even though places to pitch a tent can be scarce in some places.

Of course, it's much easier to stop and rest on a hiking trail than the open sea!

I'd love to get back to Alaska. I met my wife there - 3 weeks camped on a glacier during a climbing exped in Wrangell-St Elias NP, we stank but I still fancied her.

Keep writing about your trips - it's good reading.