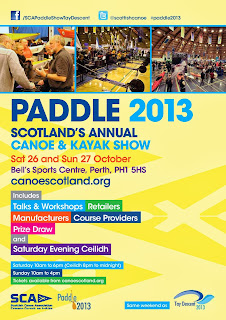 The premier of Volume 3, Sea Kayak with Gordon Brown will be on Saturday 26th October at the Scottish Canoe Association's annual show in Perth.

Then we'll do it all over again the next day, Sunday the 27th October.  (Can both be 'Premiers'?)

We have a stand at the show where we'll sell the new DVD at the bargain price of £18 - you will not find it cheaper anywhere this year.

We are on at 12:00 noon both Saturday and Sunday.  Here's the list of talks and workshops.

Our two previous DVD Premiers at the same show have been well attended and we're hoping for the same, albeit spread over two days.

On those occasions, Gordon and I have just said a quick "hello" and then played a 45 minute version of the DVD, a special edit combining a bit of coaching and a bit of journey.

That approach won't work with this DVD. There's simply no way to combine the four entirely separate films which comprise Volume 3 into one piece of video. 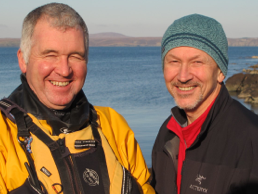 So this premier will feel a little more like a presentation.

We will play clips from two of the films, talk about how we made them, and round off with a 20 minute version of the Emergency Situations film.

So we're going to attempt a double act.

Which will be interesting, since we won't see each other until the night before the show!