One Challenge Each Month of 2018 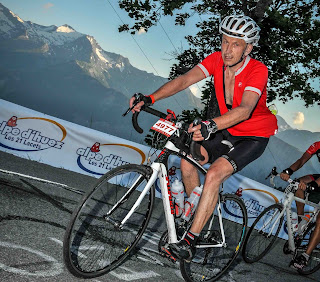 I turn sixty in 2018 and I'm planning how to mark the event.

It feels self-indulgent because two of my friends are seriously ill.  For one of them, this is almost certainly the last Christmas.

Their experience prompted me to make the most of every year, especially a milestone one.

What did you do for a big birthday year?

Initial thoughts veered towards a classic 'Big Trip' to Bhutan or similar, but that felt too much like putting all my celebratory eggs into one expensive basket.

I shall tackle at least one special challenge each month of the year.


My definition of 'challenge' is deliberately loose (my game, my rules).  It's more a micro-adventure and most will not involve flying.  It need not be some gruelling endurance event.  For example, our recent winter swim under the arch of Durdle Door was only 300m long but it felt exceptional and so would qualify, had it happened in 2018.  However, swimming it a second time would not count as a challenge.  You get the idea...

I am in the process of drawing up a list.  Some months already have several entries while some are deliberately blank because challenges are sure to crop up.  The best always seem to find me, not the other way around.  Current possibilities include; swimming the Gulf of Corryvreckan and the Sound of Harris; road biking through Morocco and... no, I'm already writing too much.


Let this be like a year-long advent calendar.  A new challenge every month.

Two final points.  Unless you know me well you probably don't know my birthday.  I always give a fake date of birth on things like Facebook and Strava because it's a key identifier.  Secondly, I can barely believe I am entering my sixtieth year - how the f**k did that happen!

Yet when I think such thoughts, I remember my two sick friends.  I give thanks that I can make plans for 2018.  I recommend you do the same.  It's later than you think.
Posted Sunday, December 24, 2017

Email ThisBlogThis!Share to TwitterShare to FacebookShare to Pinterest
Labels: yr60

Looking forward to the challenges Simon - if you wanted something a little more committing than Durdle Door but along the same lines, a swim through the Bow Fiddle would probably tick the "challenge" box?!

Happy Christmas to you and Liz, and wishing you peace, health & happiness in 2018

Great idea Ian, I shall look into that! Happy Christmas to you both - wherever you are in the world right now!
S