The Best Bike Box I Have Used 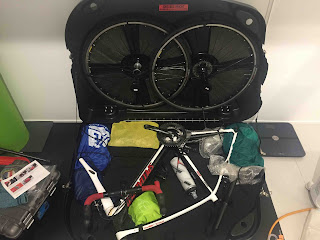 The Bonza Bike Box is the best I've used.  You can probably find a nice discount code too.

But there might be an issue regarding rust on its catches which I'll explain in a moment.

It's not the lightest way to transport a bike.  If you have a 23kg allowance, you'll not squeeze in much extra kit.  But if you have EasyJet's 32kg allowance for bikes, you can get most of what you need for a week's riding inside and in hand luggage.

Bike Box Alan is arguably tougher as the sides of the case seem to fit together better.  However, it's larger and more difficult to squeeze into a car, especially if there are two of you travelling.  Also the Alan internal strut is detachable (or at least it was on one I rented) and therefore can go missing.  Mine had the strut replaced with a random metal bar.

Those two are good.  Now to the bad.

I box I've used most has been the Polaris, and frankly my experience with it has been dreadful.  Reviews online suggest mine is not an uncommon experience.

If I had packed small items loose in the box along with the bike, they would certainly have fallen out.

The only reason they stayed shut the fourth time was I had it wrapped in plastic at the airport when coming back from Andalucia earlier this year.

I wrote about the experience at the time.

In my view, the catches on the Polaris are flawed.  Squeeze the box together (i.e. load it with another case on top) and the catches pop open, regardless of whether they are locked.

You can do it with the box empty and standing upright.

Earlier this year I visited the warehouse for Bona Bike Box to closely inspect their offering.  Their catches fasten over a loop, through which you can put a lock or a cable tie.  The first generation of Bonzas had a weakness in their catch which meant it could ease open under load, but that has been fixed.

I notice that Pro Bike Kit are selling a bike box which looks remarkably like the Bonza but cheaper.  Is it a Bonza?  Did they buy a load of the 1st Generation Bonza's with flawed catches?  I don't know.  But it's a bit weird when Pro Bike Kit also sell the apparently identical Bonza for £75 more.

Their packing videos and printed instructions are a bit rubbish.  (Hey Bonza - I make videos if you want a decent job).  But the box system is good.  I like the fact the two support struts, that prevent the box being crushed, are attached to the supplied skewers that hold the wheels in place.  These keep the whole thing rigid when shut.

There's lots of internal foam and plenty of space.  I still remove my derailleur, bubble-wrap it, and cable tie it to the inside of chain stay.  Remove the stem and handlebars to turn through an angle.  It also helps to tape the brake levers in the pulled-on position because you can arrange the handlebar better.

I had room for almost all my cycling kit.  Rather than scatter it around, I placed it in larger bags around the bike, just in case the box opened a fraction - which is didn't.  It's more difficult for a larger bag to slip out than a dozen smaller items like socks and gloves.  With essentials like shoes, helmet the first few days riding kit in hand luggage (in case the box went astray and I had to rent a bike) I didn't need to pay for extra hold luggage.

The photo below was taken before the flight home and, as you can see, my helmet is now packed in the bike box to make my hand luggage smaller.

I put a kayak roof-rack strap around the box as an added precaution, plus I stuck lots of white gaffa tape on the outside on which I wrote my flight details, addresses, name, phone number, and pleas to baggage handlers in the hope they'd treat the box gently.

The box and bike survived with barely a bash.  It was easy to wheel through the airport.  In all, I returned thoroughly impressed.  Then I stored it for a couple of weeks in a garden shed.  This is the result.
The catches are rusting.  Using the box clearly banged then up a little - nothing the eye could see but clearly rust could.  Since we have a small house, too small the bring the box indoors, I'm not sure what I can do about this.

Hi Simon, Try spraying some ACF50 on the catches- works well to reverse rust and will provide protection.
Cheers tony

Thanks for that Tony - I'll get some and try it.
S