I’m gong to start with a question. By the time I finish, I think I’ll have answered it, but who knows?

Why don’t kayakers have "sea-names" in the same way that some hikers, especially in the US, have "trail-names"?

I’ve been nursing a shoulder injury for a few weeks now. That sounds like a leap, but please stay with me. I had been managing short runs, but was seized by a chest pain that whized around my body. I walked into the local NHS hospital and within minutes was connected to a ECG.

Turns out my heart is in great shape. However, my friendly chiropractor has to be more careful when he manipulates a rib, in the hope of alleviating my shoulder pain. The sudden chest pain was probably the rib pinging back into place. I'll mention this to him tomorrow.

This put me off running for at least ten days and I pulled out of the Highlander Mountain Marathon because I couldn’t get in the training miles. 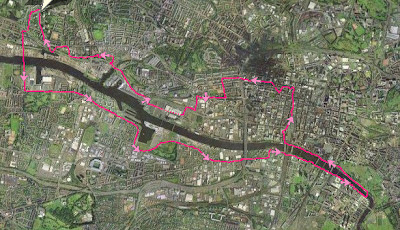 Yesterday I went out for a long-ish plod.

The GPS track is opposite - at about eleven miles, it was respectable enough for me at this stage. It was great to just cruise through the city and allow my mind to wander over issues small and smaller, which is how it alighted on the subject of "trail-names". See, we got there.

Trail-names are a phenomenon associated with the long distant trails of the USA. Perhaps in a desire to shake off the shackles of home-life, thru-hikers (as they’re known) frequently adopt an alias. When Liz and I hiked the Pacific Crest Trail in 2002 people introduced themselves to us with these names. Most remarkably they would keep a straight face. We walked with Cheddar-head, Strawberry Girl, and Black Hawk to name but three.

So I re-read part our journal and from Monday 20th May found this:

We might have new Trail names. We'd joked that ever since I said to Liz one morning "hurry up, we'll be late", I ought to be called White Rabbit. I mean, late for what? Does Canada close? And since she doesn't crave the usual fast foods, but fresh salad, she should be "Lettuce". So, should we be called “White Rabbit” & “Lettuce”.

We were overheard discussing this by Eric, who rejoices in the Trail name “Skypilot”. He thought the new names appropriate, and a New Yorker called “Grasshopper”, agreed. I’m not convinced.

I’ve yet to meet the 43 year old Englishman who could introduce himself and his partner with the words, "Hello, we're White Rabbit & Lettuce".

In fact, shortly after this we started subverting the system. As we walked we’d invent increasingly bizare names names and use them with whoever we met. On Saturday 29th June, at someone’s home I wrote:

“Two thru-hikers were enjoying their hospitality, but I nearly laughed out loud when we introduced ourselves. Liz and I have not really got into this Trailname thing.

We jokingly invented new names for each other every few days, and after a bout of trail-food induced flatulence, I suggested the name “Restless Wind”.

Now here we were introducing ourselves to two hikers, and one of them said, “Hi. I’m Restless Wind”. I had to bite my pack-strap to stop myself from sniggering. And he seems like a decent bloke.”

So back to kayaking. Our boats have names. On the VHF Radio, we have call-signs, usually the boat name. So why not something like a trail name?

Or have I just answered my own question?
Posted Monday, February 26, 2007

The first boat I built (for my daughter) was to Nick Schade's Great Auk design, so she became called "Geyrfugl", the Icelandic name for this bird (extinct since 1844).

That's now become my "screen name" for things like ebay, UKRiversGuidebook Forum and now here. It's not a name I would have chosen for myself if I'd been looking for a "sea name", but, faced with a sudden need to invent a login name to use, it seemed a good default.

Easier for everyone, anyway, than the name of the boat I built for myself - "Piqqalujamik takujumavunga", although perhaps it would be a more appropriate name for me, it means "I want to see an iceberg".

I seem to remember reading (quite some time ago so it may not be perfect recall) that our sailing-canoe cousins name their craft and use those names to address each other.