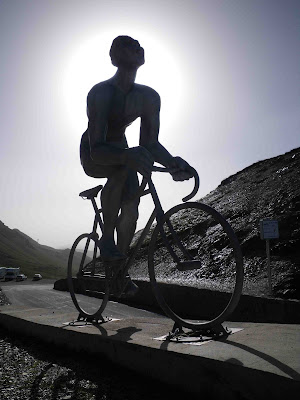 The King Col of the Pyrenees, it's worth five stars in anyone's book, including one of our two 'Guidebooks', Tour Climbs by Chris Sidwells

(The other book we relied upon and recommend is the superb Great Road Climbs of the Pyrenees by Graeme Fife).

You can read all about the long history of the Tourmalet in such books (first major col in the TdF 1910; the 'blacksmith' incident'; and much more).

So as I write, sitting in our van an hour or so having finished, I'll just share some quick thoughts.  (I wrote this at the time and I'm publishing it weeks later)

The first decision is where to start.

We climbed it from the west because we've just come from Gavarnie (see yesterday).

From this side, a purist would begin the climb back in Argeles-Gazost from where we rode the Aubisque and Hautacam.

Or perhaps from Pierrefitte-Nestalas?  Indeed, the Topo maps in the €5 pack (available at all Tourist Offices in the valley) start the Tourmalet climb at Pierrefitte-Nestalas, which is linked to Argeles by a cycle track, making the ride 64km with 1655m of ascent.

However, we're staying at the recommended Airotel Campsite in Luz Saint Sauveur.  This town is higher and nearer the Tourmalet than Argeles-Gazost, so is riding from here cheating? 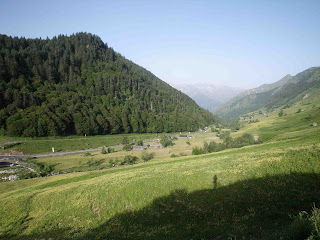 I don't care.  We chose to ride from Luz because the road-ride between Pierrefitte-Nestalas and Luz did not look at all pleasant.


It's a busy, busy road, thronged by tourists, coaches, campervans, lorries and other traffic heading to Luz and Gavarnie beyond.

What's more, the 18.6km climb indicators by the side of the road mark the Tourmalet ascent from just outside Luz, so they obviously think the climb starts in this town.

Yet again we started early, with wheels rolling by 6:40am.

Yesterday afternoon's temperature topped 35c leaving us northern Europeans wilting. There was no way we wanted to be on this climb in full sun. 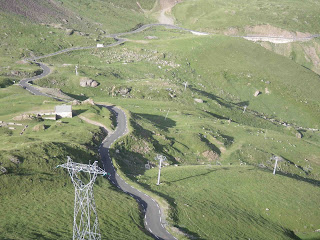 Consequently, we were among the first to the summit, reaching it in 2 hours, just before the coaches, motorbikes and motor homes decided to challenge their mechanical engines to the same effort.

A feature of the Tourmalet climb from this side are the long rising straights, punctuated infrequently by several hair-pin bends.

Seeing the rising road stretch ahead could have been demoralising, but I found it jolly good fun, although there were two distinct halves to the ride.

The first led through villages and beneath shady trees on what I'd call 'normal' roads, the every day stuff of cycling in France.  The early start meant the sun was still behind the mountain for a lot of the time and the road remained cool.

After the first ski station at 9km it's clear you're now on a 'mountain' road, lined with lush pasture and a somewhat rougher surface.  Despite all the bends in the photos, there really are more rising straights than switchbacks. 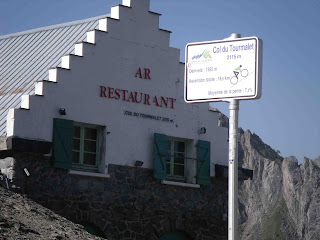 At the top of these the famously stark, rock landscape emerges.  It all feels strangely familiar, having seen the TdF go over this Col so many times on TV.

The cafe wasn't open, but police and firefighters were going in for a meeting of some kind, possibly in preparation for this year's tour.

I waited on the summit while Liz caught up and we had the usual photo-fest.  By this time we were definitely not alone.

All sorts of motorised tourists were arriving to have their photo taken on this famous Col.  Only the cyclists had the satisfaction of knowing they'd reached it through their own efforts.

What's this about? We took our campervan down the Pyrenees this summer, riding classic cols and hiking great walks. Now I'm sharing the info about best campsites for the best rides.
Posted Wednesday, August 15, 2012