If you want to read the whole of this Pyrenees 2012 thread, click here. 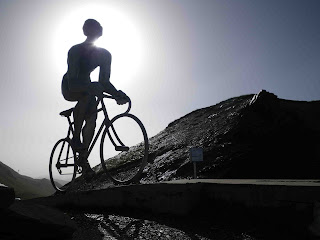 So here's the plan.

Over the next few weeks I'll publish the routes we tackled with details of which campsites worked best, in which towns, for which climbs.

There will be some video and photos too.

I couldn't find anything like this when I was planning, so hopefully they'll help other people to decide their own route through these amazing mountains.

Think of this as an itinerary you can adapt to your own needs, whilst also learning from our mistakes, of which we made plenty. 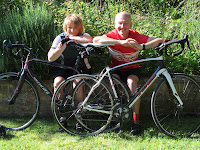 Classic Cols like the Tourmalet (the Giant is above) and Aubisque; testing ski-station climbs like Hautacam and Luz Ardiden.

And because you might like to escape the saddle occasionally, some brilliant mountain walking near Lescun and Gavarnie.

Firstly, some nuts-and-bolts of our trip.

We each have Specialized carbon-frame bikes, a Ruby for Liz and a Roubaix for me. We're not great riders and don't compete, but I train and ride Sportives. 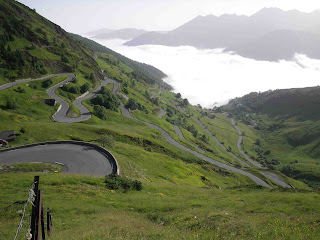 
For descending higher cols, an ultralight wind-proof gillet plus arm-warmers will suffice in most situations, but when cloud fills the valley you'll freeze without a light rain jacket to slip on top.

Thin socks and track mitts should be enough for the extremities, but again, if you could be out in serious mountain weather you'll want full finger wind-proof gloves and perhaps thin overshoes.

Unlike most 'real' cyclists we use SPDs (as opposed to Look or other types of clip) because we like shoes with recessed cleats.  These allow us to stroll around towns without looking like constipated ducks.  Of an evening, if we want to go shopping or for a meal, we can leave the van on a campsite and ride a few kilometres into town in normal clothes plus cycling shoes.

Easy to overlook is a bike cleaning kit. Chain cleaner, degreaser, brush, sponge and bucket (or similar) plus lube are all essential, as are a small tool kit and spares, especially brake blocks.


CAMPERVAN
We have a VW T5 long wheelbase campervan, converted by Jerba, with a pop-up roof. We took it to the Alps and elsewhere in France and Italy for the first time in 2011 and learnt a heck of a lot. 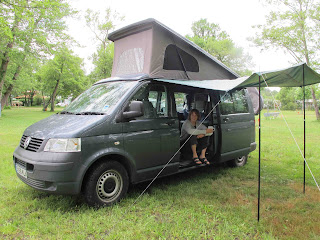 We went in June, so the Cols would be open and some of the snow would have left the high peaks where we aimed to hike.


Crucially for our budget, the campsites in June are not yet in high season when prices almost double.

To get an even better price (and usually free electric) the £12 ACSI card and guidebook are a superb deal, which pays for itself in days.

If you have a campervan, as opposed to a tent or caravan, you can use the French network of Aires de Camping Car.

Many villages allocate a space for campervans; some are nice shady riverbanks, others are broiling sports-centre car parks. All the Aires France

, is an invaluable guide to finding them, but it's not complete. We regularly find small Aires which are not in the book, so it pays to keep a look out for the Aires symbol.

We don't stay in one place more than a couple of days. "Wanderin' star" became our theme tune, and we like to keep moving, switching between campsites and free Aires de Camping Car. 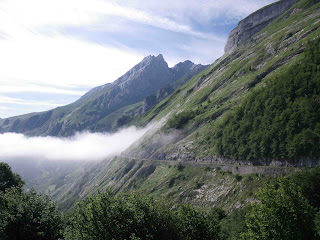 Typically we'll arrive at a campsite early afternoon, explore a town and be set to ride the next day.


After that ride we'll do laundry, charge all batteries, do emails, and tell the campsite owners we're leaving the next day.

Check-out time is always noon, so that gives us time for a good long ride in the morning plus a shower before we have to leave.

We'll buy food at a supermarket on our way to our overnight stop, which might be a campsite or, more likely, a free Aire de Camping Car.

There'll probably be no services at the Aire but we don't need any because we're clean and the van is fully charged and loaded with water.

All this changes when the thermometer rises, because when it's hot, we feel we need a nice campsite. 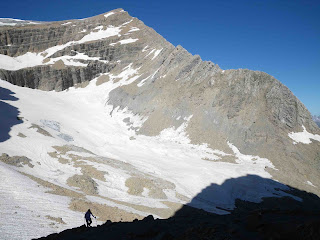 After several hours cooking on a saddle, you don't want to return to a scorching metal box that has been cooking in a shade-less car park.

Indeed, in the heat, it is essential to be able to sit comfortably in shade outside your van.

So this year Liz made our own fold-away awning and packed two small folding chairs with a table.

It felt very "old-dears-camping" but those chairs were superb.

Oh, and a sun reflector for the windscreen is a must.

DRIVING ROUTE
We've tried ferries but prefer the Eurotunnel for its speed an convenience, although we don't book a return ticket. We have the luxury of being able to stay out as long as we wish. 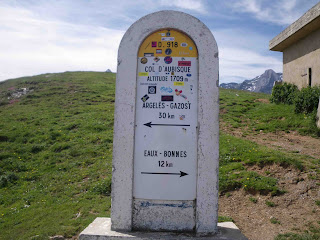 We booked the return crossing on the iPad from a campsite in the Cevennes, two days before coming back.

We used the toll-minimising routes through France suggested by this excellent website.

Our Garmin SatNav was helpful when we were close to a location but absolutely useless for a longer French route.

I suspect this is because of the French road classification system. A-autoroute; N-main road (route National); D-everything else!

The Garmin Nuvi sees no difference between a wide, modern, fast road between A-B, and an old, steep, narrow, winding mountain route that just happens to be slightly shorter.

As they're both D roads, they're both just as fast, right? No!  What I'm saying is you need a good Michelin Map Book

and a dose of common sense.


CYCLING ROUTE
We wanted to tackle a few rides and cols in the lower Pyrenees to "warm up", and while I'll describe these in coming days, they actually proved tougher than some of the high classic rides of the Haut Pyrenees. 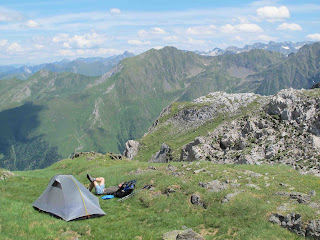 Rarely did we tackle more than one big Col a day, mainly because our visit coincided with a period of exceptionally hot weather.


By lunchtime all anyone wanted to do was lie in the shade.

The towns in which we stayed were all close to the cols we'd ride, and most lie on the D918 road.

I was clear I wanted to ride a col before I drove it.

Liz was clear, she didn't want our campervan to be exhausted by hauling itself over col after col. Because of these two self imposed conditions, our driving route between towns is not always the most direct.

There is, however, a logic there... somewhere.  That's the preamble done. The first route comes tomorrow.
Posted Wednesday, August 01, 2012