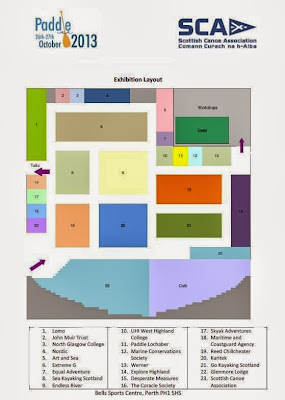 Saturday and Sunday have lousy weather forecasts in Scotland.

So drive to the Bell's Sports Centre in Perth and come to Paddle 13 - the Scottish Canoe Association's annual show.

We'll premier our new DVD at 12:00 noon on both Saturday and Sunday.  Yes, two premiers of Volume 3, Sea Kayak with Gordon Brown - that's for people who take part in the Tay Descent on Saturday.

We won't just push a button and show a film.  Gordon and I will attempt a double act, without rehearsal, as we introduce a series of short videos taken from the four films on the DVD.  So that's certain to go well.


We'll also give the first screening of a 20min 'Festival Edit' of our film Handling Emergency Situations.  This is the version which will go into the US and Canadian film festivals early next year.

Before and afterwards, I'll be on the Skyak Adventures' stand along with Gordon and Morag Brown, where we'll be selling the DVDs at ridiculously low prices with offers for one, two and all three.

Find us on stand 17 - just turn left when you come into the main hall.  The plan above might help.

For HM Coastguard, Anne Young will be at the show.  Anne was instrumental to the success of our Emergency Situations film and was persuaded to take part.  You might recognise her in the video below.

There are some great speakers and workshops too, all organised by Mark McKerral who you'll also see in the video below made by Mark Heathcote at last years show.