Retul Bike Fitting - Is It Worth It?

How far could you walk in badly fitting shoes?  My guess is you'd give up after a few miles because, whether too large or too small, they would inevitably be too painful.

Yet thousands of cyclists clock up hundreds of miles each year on ill-fitting bikes that cause them all sorts of pain; knee, hip, back and neck being the most common.  Believe me I know. I was one of them.

Bike fitting was once a black art.  Not so long ago you'd ride around a car park while the grizzled ex-pro shop owner squinted through one eye and used a mixture of experience, hope and luck to fit the bike.  Now technology has transformed bike fitting.


If you'd like to read how to achieve the perfect fit, check out Bike Fit by Phil Burt, the Head Physiotherapist at British Cycling

.  Inside you'll find all the angles your body ought to be at while riding, plus a host of superb exercises for off the bike.  It really is an excellent book. 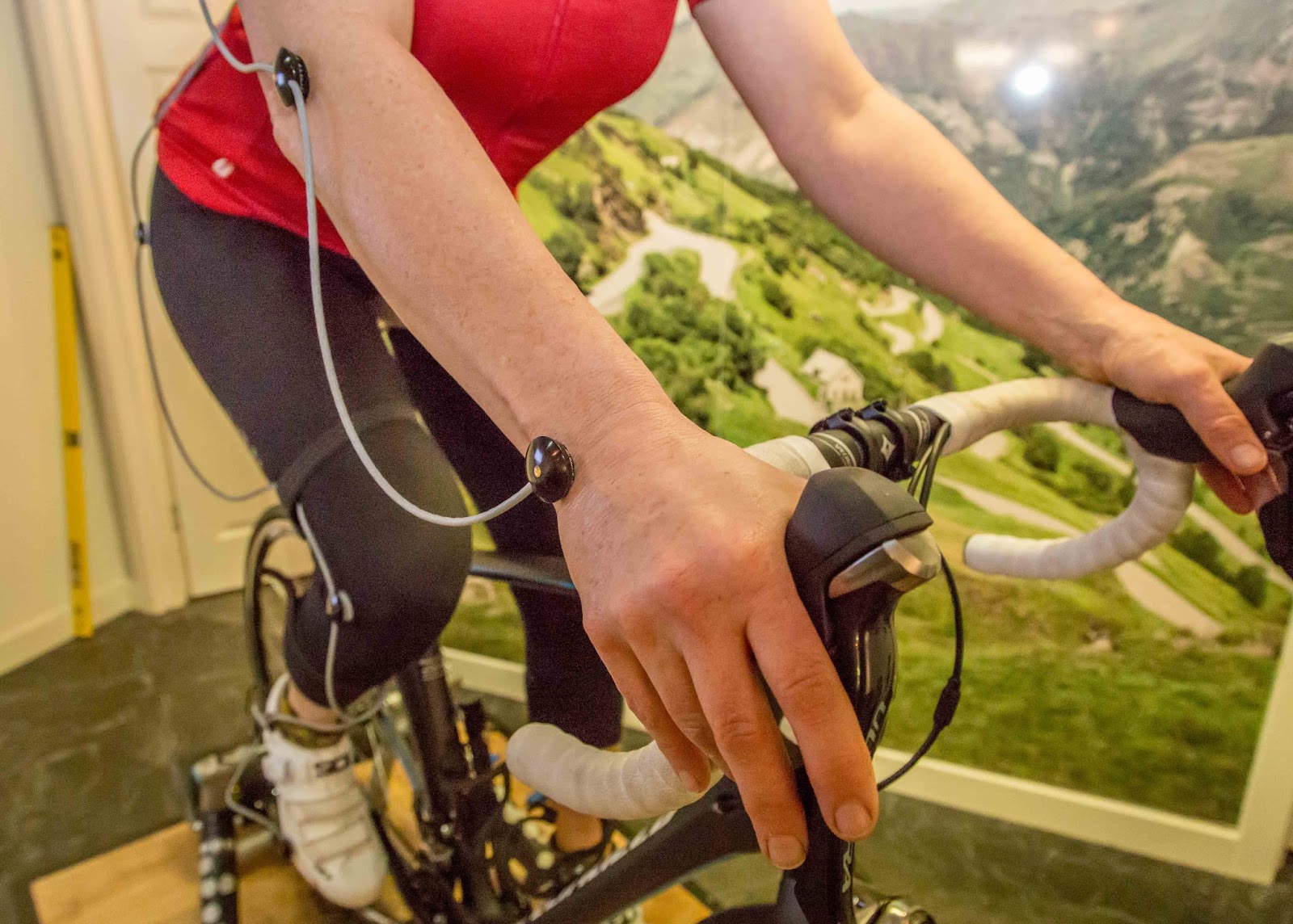 You'll also see that Mr Burt's chosen method of bike fitting, along with Team Sky and British Cycling, is the Retul system.

3D motion-capture technology reveals the precise angles through which all the joints and levers in you body are working dynamically, while you are riding your bike.

The bike fitter's skill lies in adjusting the bike’s variable components to ensure those joints and levers all work at maximum efficiency and comfort.

A sportive rider, who might spend twelve hours in the saddle, could be adjusted for comfort while a flat-out time trialist could be set for maximum power.

I just wanted my leg to stop hurting.

While many bike shops offer fitting services, Velocity44 in Stirling is one of the few in Scotland (where I live) to have invested twenty thousand pounds in the Retul system and training.  Consequently all manner of cyclists, from weekend warriors to Commonwealth Games contenders, have found their way to the Stirling store and paid their £160.  "It's the price of a good winter rain jacket", says shop owner and bike fitter Paul Allanach as he slots my bike into the static turbo trainer. 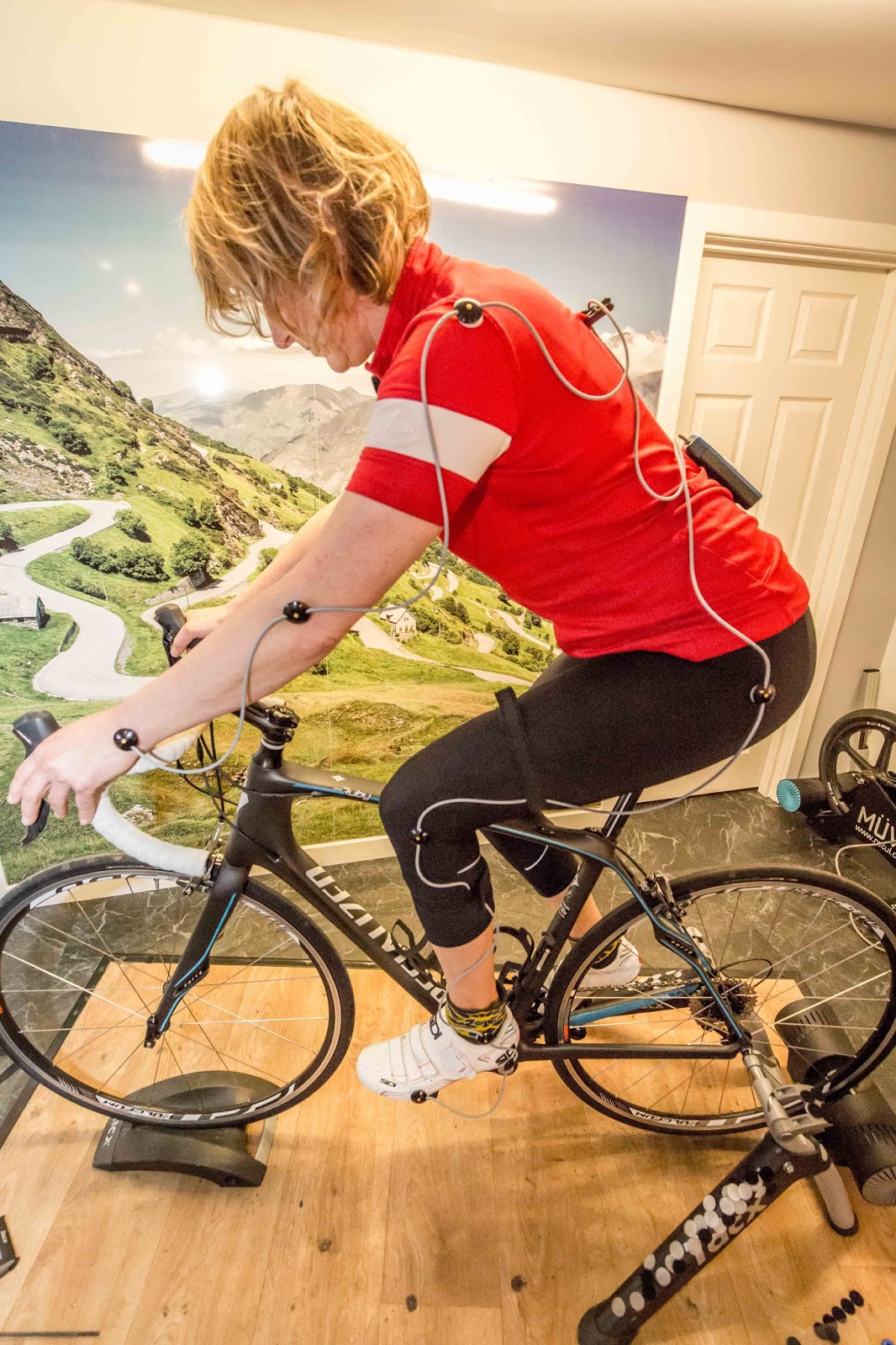 At this stage I ought to add this article first appeared in the magazine Scottish Cycling winter 2014 edition, since when my wife has also had a Retul fit with Paul during which I shot the accompanying photos.

Probably the best time to visit is before you buy a new bike.   Paul has a special bike-like contraption with saddle, handlebars and back wheel that can put a rider in almost any position.

"We get you into your ideal riding position and then advise which bikes will fit best, depending on the sort of riding you'll be doing".

However, like me most folk want to improve their position on their existing bike.

My session started with a body analysis.  Paul watched me walk across the room and tested my range of motion on a physiotherapist’s bench.  Then came the first change - he removed the cleats from my shoes and put them back in a slightly different place.  "They were too close to your toes", Paul explained, "they should be under the ball of your foot'. 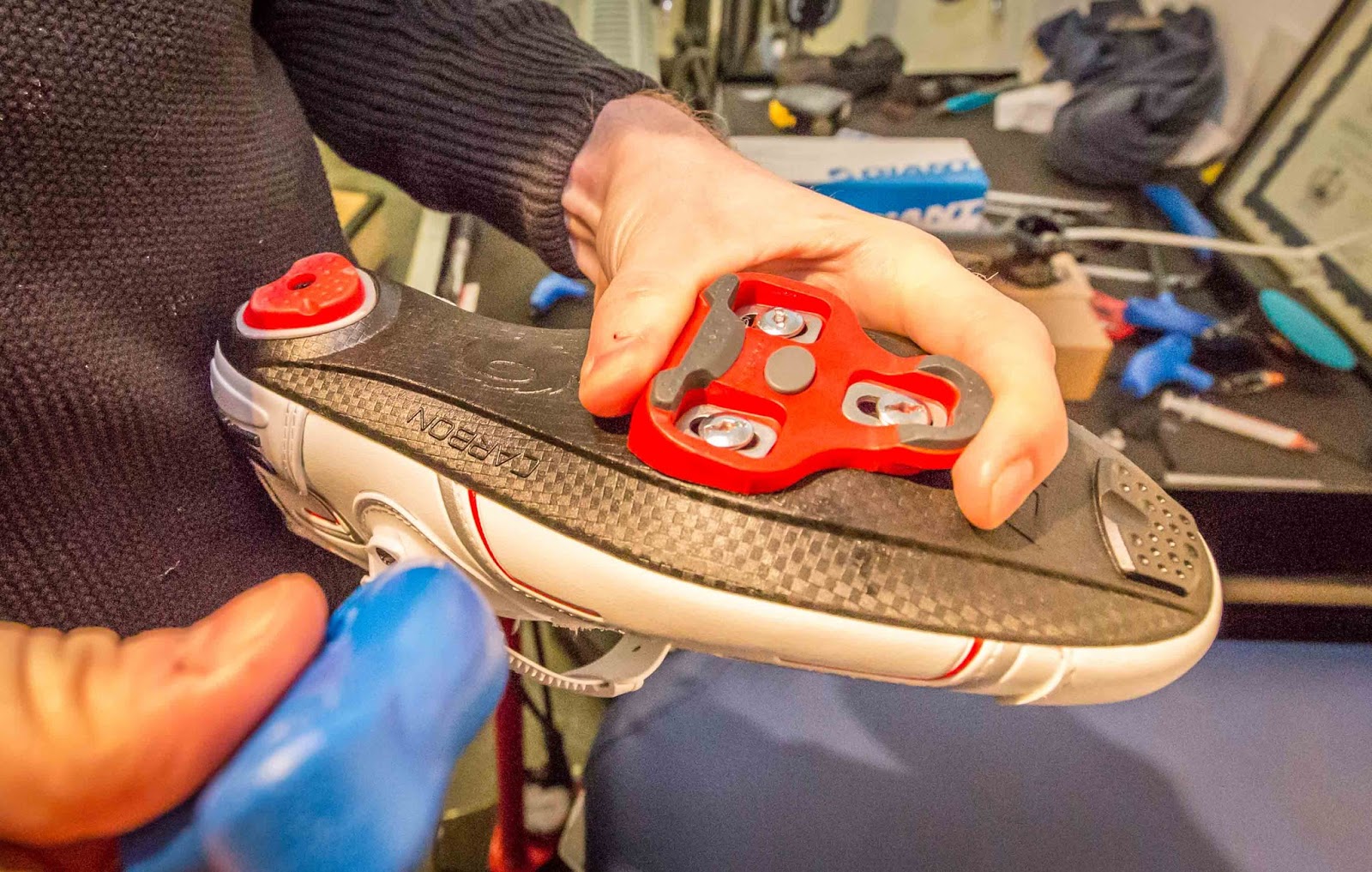 That's when things got weird.  While I stood in the basement of this cycling shop in my full riding kit, he walked around me, feeling each of my joints and sticking black Velcro discs on them.  Toe, ankle knee hip – you get the idea.  A web of sensors was then attached to the discs, each linked to the next with a wire.  I climbed on my bike feeling like a sparsely decorated Christmas tree. 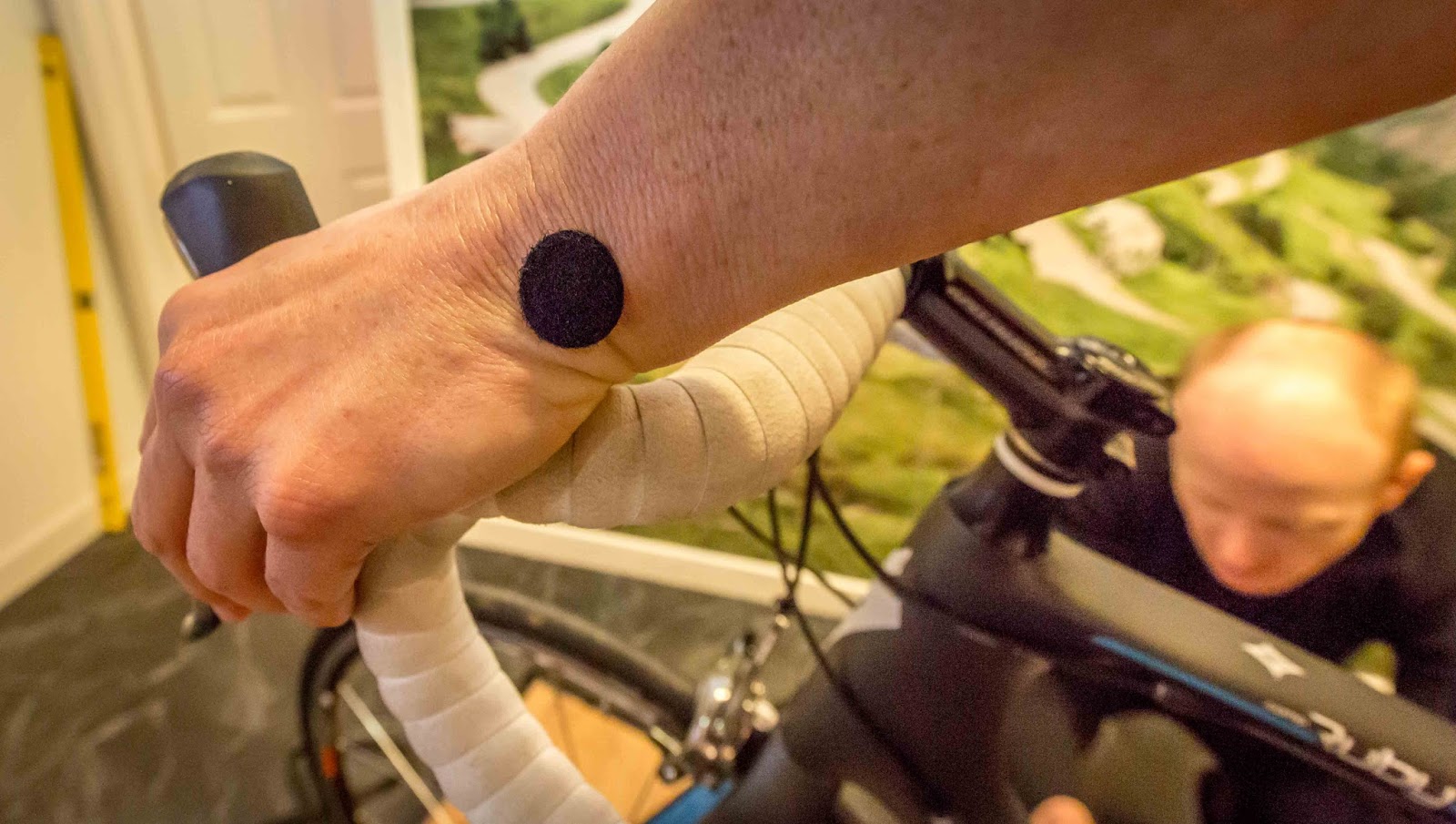 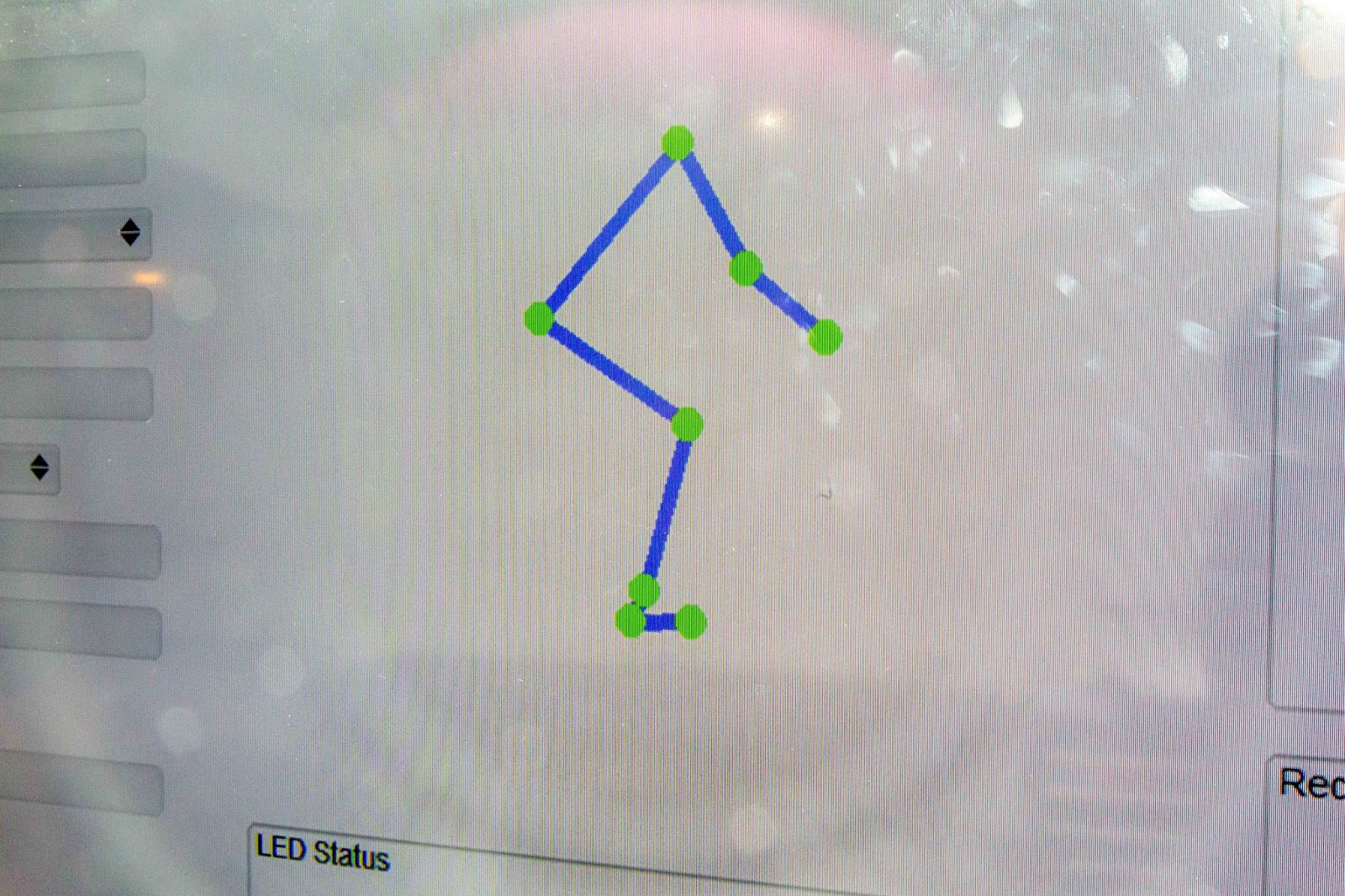 When I went faster so did he.  I was musing on this headless, graphical representation of me on a bike when the full significance of this extraordinary system hit me.

The fleshy parts of our bodies, all the muscle, fat and skin, obscure how the really important parts, the levers and joints of our arms and legs, are working in relation to each other while we ride a bike.

Retul sees right through clothes and everything else.  Or more accurately, it ignores those extraneous factors to focus solely on the angles that matter.

After a few passes, the sensors were switched to the discs on my other side, the bike platform was swung through 180 degrees, and we repeated the exercise on the right side of my body.  It took only minutes for Paul to conclude, "You have a scrappy position just now". 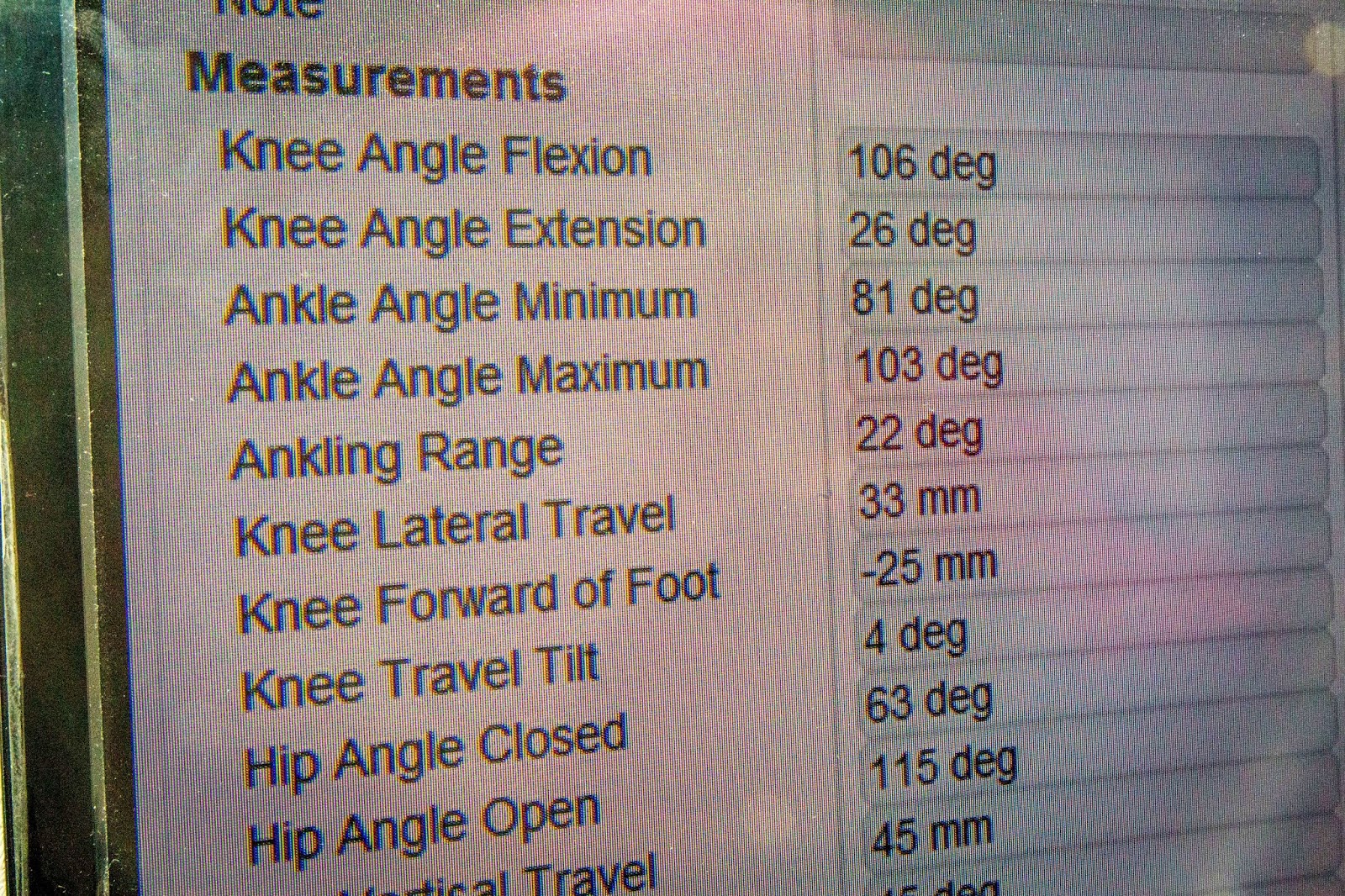 The stick man was replaced with a numerical display.

"It's confusing to look at more than twenty variables, so I'll just pick out some key ones" explained Paul, pointing to a row called 'Knee Angle Extension'.

"At the low point your knee is a 31 degrees, so it's close to locking out.  It should be between 35 and 40 degrees.  That means your saddle is too high".

Paul worked his way through measurement after measurement.  "'Knee Forward of Foot' measures how far your knee is from being over your 5th metatarsal head when you start your power stroke.  Ideally it would be zero with plus or minus 10mm, but your knee is 34mm behind that position."

In summary; my saddle was too high and too far back; I sat too upright; and my stem was probably the wrong way around. 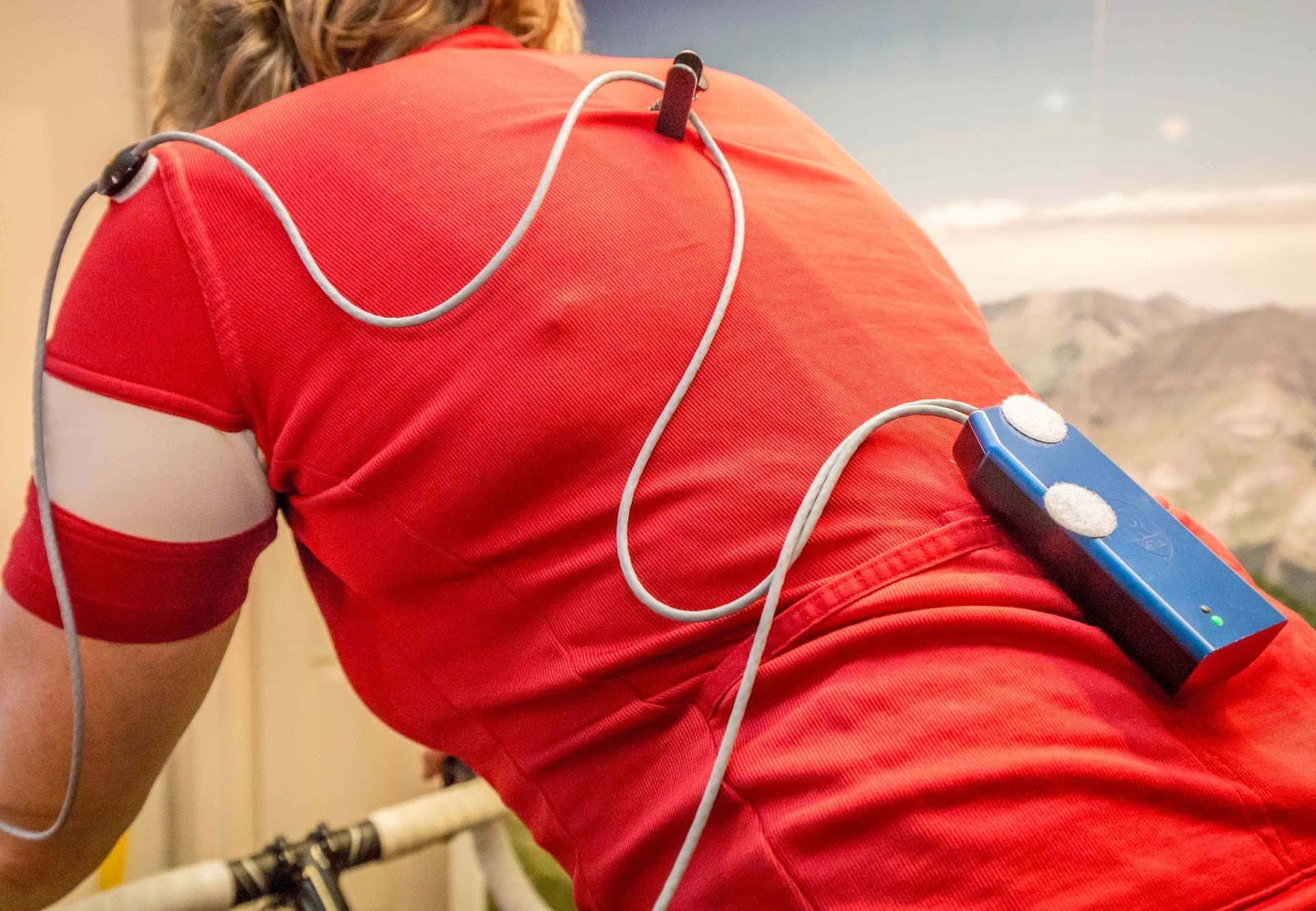 Having revealed the problems, technology made way for the true art of the bike fitter.

A veteran of the Scottish cycling scene, with more than 400 bike fits behind him, Paul Allanach knows how to adjust a bike.

Within minutes my saddle was in its new position, a different stem was holding the handlebars in place, and I was back on the bike feeling... odd.

This new position felt completely wrong!  "Don't worry", Paul assured me, "it's just muscle memory.  You've been riding your bike in the old position for so long, this new one is going to take a couple of weeks to get used to."

The sensors were stuck back in place and the stick-man went for another ride.  A few tweaks to the saddle and stem, then Paul ran the numbers for a second time putting them on the screen with the original figures. 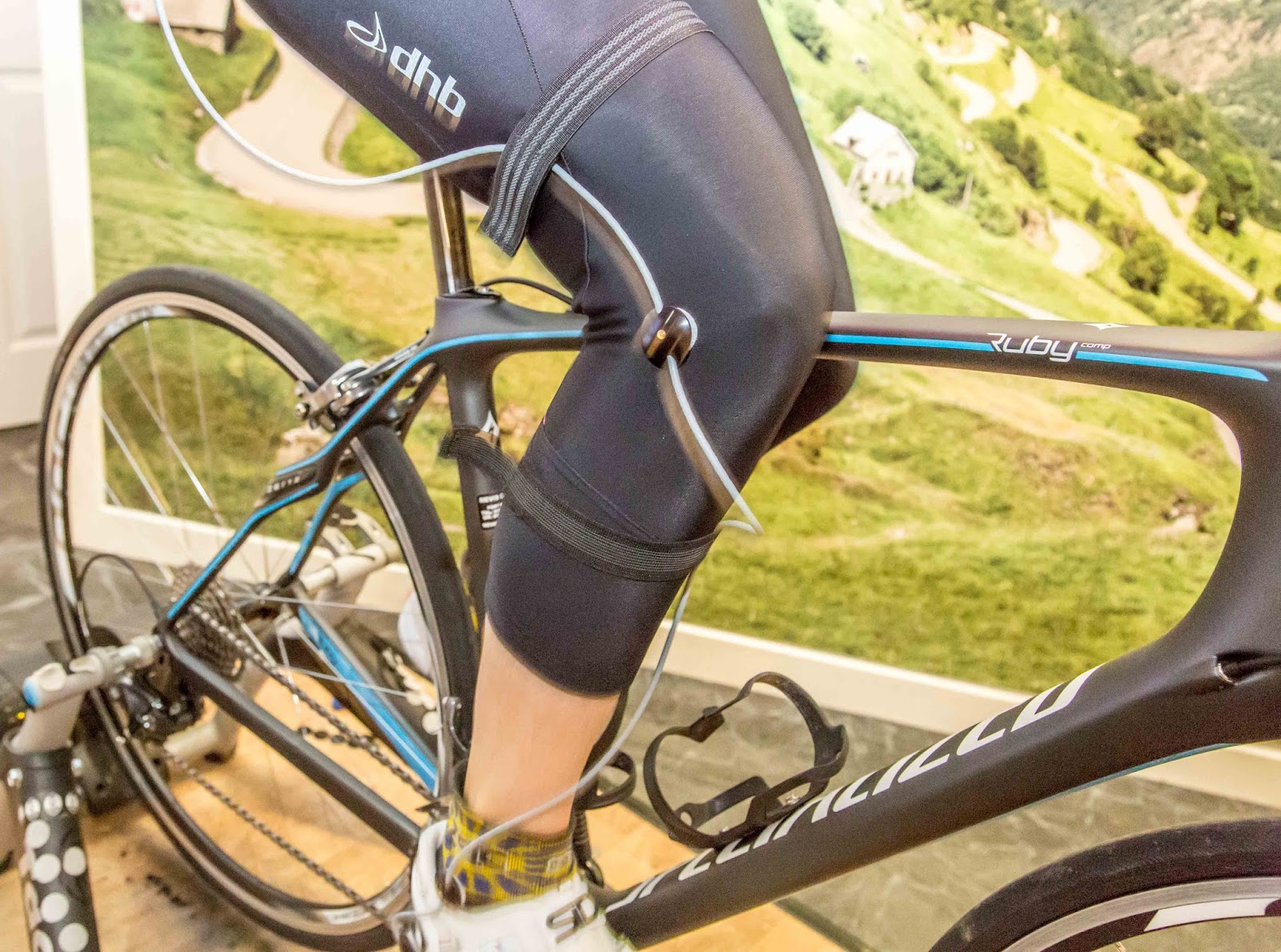 All the angles, from ankle to wrist, were closer to the ideal for my age, riding and body type.  "Look at your 'Back Angle' now," Paul said.

"A racer would want to be about 40 degrees, with 50 degrees about right for touring.  You were at 52, which is far too upright, but now you’re 47 degrees."

The screen switched to show two side-on photos, before and after.  My original rounded shoulder position with slight hump had been completely ironed out.

It certainly looked right even if it still felt odd.

Months later and I'm much more comfortable with the new position.  My leg pain has reduced and I worked with a physiotherapist to fix the rest.   As I said, I was so impressed I persuaded my wife to also have a Retul fit and her position also improved.

I'm under no illusions that a bike fit is suddenly going to turn us into Tour de France contenders or help us zoom up hills.  But at least we know our bikes are the best they can be, even if we're not.  Not yet at least.
Posted Wednesday, March 18, 2015

Interesting, thanks Simon. You may also be interested in this article -> http://eandt.theiet.org/magazine/2015/03/sports-technology.cfm in recient IET (IEE as was) magazine.
David

That's a good piece David - I hadn't realises Retul had been bought by Specialized. Thanks for pointing me to it.
S