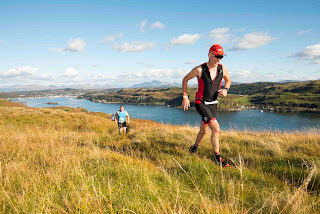 What a fantastic end to my Triathlon season.  And what a difference between this and my previous event.

The organised, regimented, Ironman approach to dealing with almost three thousand competitors could not be more different to the laid-back, yet equally professional way in which Durty Events draw 400 people to Craggy Island.

The island is actually Kerrera, just off Oban and only an hour from our ferry.  Because it's so small, the event is split over two days with 200 competitors each day.   Last year I raced one day and stayed on to marshal.

As you might gather from the photo, it's all off road.  The swim is arguably the best bit, because you swim from the mainland to the island on which you'll race.  That gives the whole thing quite a kick-start.  Since this was my last race of the year I decided to go hard in the swim and, even though I was breathing hard on every stroke (rather than my usual bilateral every third stroke) I came out of the water in a good time, two and a half minutes faster than last year.  I even beat a pro I know - who promptly annihilated me on the bike. 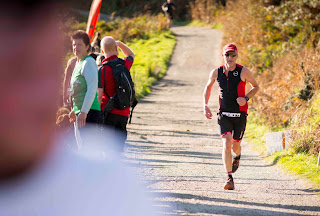 The bike is a lap of the island's perimeter, and while it starts on road, that road is more cratered than Port Stanley's runway after the RAF visited during the Falkland's conflict.  I hadn't trained enough on the MTB and was only a minute faster than last year.

The hill-run tackles the spine of the island, from one end to the other, including a fairly large lump in the middle.  Return is by the same 'road' that ate your bike's suspension earlier.

I'm not sure why this race should be so friendly, but it is.  For some people it's their first and possibly only triathlon.  Others have been racing all summer and are fit, fitness which they know will dissipate over winter.  Craggy Island is a chance for a last blast before that inevitable decline.

I bumped into lots of old friends and even managed to beat a couple.  Hmm, perhaps that's why I liked it so much.
Posted Thursday, October 13, 2016