Cycleways - How To Waste Money and Annoy Lots of People

It's very simple.  Build a cycleway then fail to maintain it, clean it or keep it free of parked vehicles.

Some cycleways around here are so covered in rocks (spat out by vehicle tyres), leaves and thorns (from overhanging trees) and floodwater (from blocked drains) that it's actually safer to ride on the road.

Should Local Authorities build cycleways if they can't keep their existing ones in decent condition? 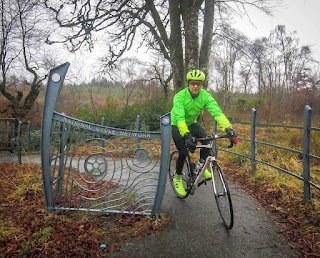 Good practice was in evidence when I rode the Sustrans Cycleway 78 from Oban to Corran Ferry and home on Saturday in heavy rain and poor visibility.

Maintenance was due to start soon on a section which is collapsing.  I believe this is Highland Council's area, so top marks.

Some sections however, particularly those which ran alongside the road, were covered in stones spat out by vehicles, and the winter winds had brought down quite a few branches.

On balance though I felt much safer than had I been tangling with traffic.

There were only a two short sections where I had to go on the main road; shortly after Oban to Connel and a 2mile section around Duror - the bit where the two Local Authority boundaries meet.

Incidentally, that new Pearl Izumi jacket was superb and the shoe covers fairly good when it came to keeping me dry in the downpour.  I'll write more about them in future posts.

There are other bits of cycleway which fare less well.  When I next ride those I'll post photos, but for now the Oban to Ballachulish section of route 78 gets a thumbs up from me.

Yes I rode that last summer (coming from L Aline to Oban) and was also very impressed by the quality and extent of the path. Just a pity about three times I think when the path diverged significantly from the main road and took in seriously steep sections that would have challenged a fully loaded touring cyclist. Oh that was me!
Well done to the local authority, and I hope they can maintain it. Cycle paths where I live get badly neglected too. And some surfaces are like corrugated iron and the motorists wonder why I'm on the road. And I wonder (and am embarassed) when I think of our continentinal cycling friends whose paths are generally much better - what do they think? There needs to be a standard for construction. Maybe there is. Open ended discussion ....

Thanks for sharing your thoughts David. I didn't want to come to any conclusions in this. It's great to have cycleways, but when they're not used for the reasons I've outlined, it's SO frustrating.

When I used to live in Glasgow the green cycle lanes (as opposed to cycleways) seemed to be regarded as parking lanes, with motorists bumping two-wheels onto the pavement, thus blocking the cycle lane for cyclists and the footpath for wheelchair and similar users.

You're right about the route to Oban diverging from the flatter road, offering a hilly alternative. This used to frustrate me too, but those sections of road also have some fast, tight bends around which log lorries come thundering. I can see how touring cyclist with panniers would prefer the road though!