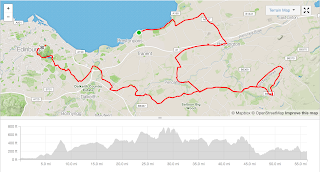 All three courses, swim bike and run, on the Edinburgh Ironman 70.3 have changed since the original maps were posted at the launch of this event.  We're told the final routes are in place but no-one can be certain.

I ran the run route (the old run route!) back in January.  The new iteration is not so different as to give me many concerns, but I will walk it before the event.

However, the swim and the bike are on routes mostly new to me, so a recce was always going to be valuable.  I hope you'll find the info useful too.

a) a private road will be used for a short section at 46.2 miles and

b) the end of the bike route at 54miles would mean cycling the wrong way, against the one-way, traffic coming around Arthur's Seat.

That's the big hill in the centre of the city at the base of which the expo, finish and run will take place.

If you wish to ride the bike route in advance - highly recommended -there are two easy diversions for those above problems.  You can read the details on the Facebook group or just download and follow my .GPX or .TCX track.  I went slightly wrong once, clearly visible at 11 miles, but only for 20ft and was quickly back on course.

The overal impression of the route is one through rolling farmland.

It starts flat on the coast and ends in the city, but between the two it's fields fields fields.  There were no long hills to slowly crank up for ages.  There were lots of short, sometimes very steep hills where the route dropped into a stream valley and had to climb out the other side.

The road surface is moderately good with sections that are pretty poor.

Quite a few stretches of road are not smooth but chunky, rough tarmac that's very draggy on a bike.

Almost every descent cannot be taken on tri-bars because there's a 'surprise' part way down; a pothole (crater in some cases), a torn section of road surface, a sudden turn in the course or, in one case, a stop sign and major road to cross.

Whenever heading into a tree-covered corridor descent, or one were you can't see the exit, I'm going to play safe.

The 'toughest' bit for me, certainly the most technical, is the loop out of Gifford.  It starts with a  climb and there's lots of the aforementioned hazards right up until you drop back down to Gifford again.  The excellent Lanterne Rouge cafe is well worth a coffee stop if you're doing the recce.

Riding back into the city you can see the finish from quite a distance, because Arthur's Seat is such a distinctive landmark.

Initially it looks like it'll take ages to reach, but you get to the bottom surprisingly fast.

Curiously, this involved a leg through a housing estate including a pedestrian area with offset railings designed to slow cycles!

Edit: I'm told (via Facebook) that the railings will be removed and ramps put in place to cope with the curbs.

I rode a slow recce on my winter bike and on race day will definitely use a tri bike.  However, I will put on a bigger cassette to help with those short sharp rises.  I did my swim after my ride and it was fine. The swim and bike routes did feel quite exposed to wind, especially from the North to Easterly quarter.  That would give a choppy swim and a tough initial part to the bike.  That said, since most of the route is in a westerly direction, it will probably even out.
Posted Saturday, May 20, 2017