First Race of 2017 This Weekend 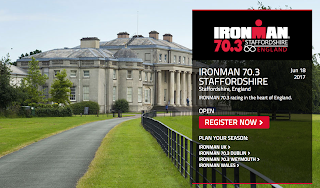 My first race of 2017 will be the half-Ironman in Staffordshire next Sunday 18th June.  That wasn't the original plan.

My aim had been to race Loch LoMan four weeks earlier and iron out any race-related problems.

Lethargy and a persistent cough, possibly virus, put a month-long hole in my training and pushed me out of the Loch Lomond race.

I'm using a new bike, new trisuit and new nutrition products, all of which work well in training but none of which have been tested under race conditions.

Consequently, I'm not expecting a fantastic result at Staffordshire.  Indeed, I've discussed with my coach Joe Beer and decided to treat this as a tough day's training.  I'll back-off the run rather than going full gas.

That's because my first 'A' race of 2017 happens just two weeks later - unfortunate timing - but I hope to do better at Ironman 70.3 Edinburgh, the first of the brand's visits to Scotland.

I'm slightly concerned about the Staffordshire course.  There have only been two races held there (you can watch the TV coverage for 2015 and 2016) and this year's will be the last.  The 2015 race sold out in 14 minutes, whereas this year's still hasn't sold out.  What's more, it's the last time the event will be held largely in the grounds of Shrugborough because the estate has been sold and, I believe, the new owners have a different focus for the estate.

The TV shows produced by Dreamteam, and with my friend Patrick Winterton as commentator, were useful preparation.  Still I'm driving down mid-week so I'll have time to recce the course and feel relaxed before the inevitable mayhem.  Sadly I'll miss being part of the Adventure Show's coverage of The Celtman this year as it happens on the same weekend.

That's quite a lot of effort for a training race, so I hope it pays off at Edinburgh!