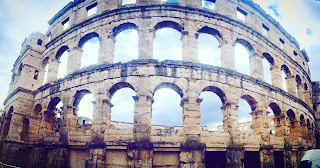 I'd like to say it was me, not them, but actually it was a mixture of both.

Perhaps there are some fundamental issues with this course, time of year and location?

Certainly I was disappointed to bring my Ironman racing time to an end at this event.

RUN
Firstly, the superb.  Can there be a better finish area than this?  The ancient Roman Colosseum in the centre of the Istrian city of Pula.  Wow.  The expo and registration is set up just outside the monument but you finish inside a spectacular piece of history.


Except I didn't.  The day before we travelled, I came back from a run, knelt to stretch, and a pain shot through my right knee.  Test runs in the days before the race were painful and, since we were staying in Croatia for a three week holiday, I hesitated to run the full distance in case of permanent damage.  Should I run?  In the end the decision was made for me.

SWIM
On the morning of the race the organisers cancelled the swim.  A triathlon with no swim is not a triathlon, so why bother to run?  I pulled all my stuff out of transition and decided to quit after the bike.

Swims are regularly cancelled at triathlons.  However, I'm not alone in suspecting there's a fundamental problem with the location of this swim course.  In 2015 the weather was so bad buoys floated off course and people swam much further than necessary - read about that here. 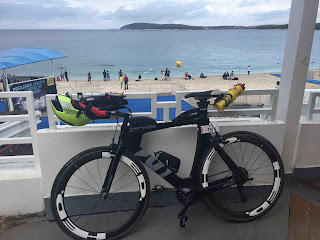 In 2016 the sea was also very rough, read about that here.  Then in 2017 even rougher and they cancelled the swim, the correct call given the conditions.

BIKE
The bike course was good and fast, albeit slightly long according to both my Garmins.  What's more it was dry, which was a blessing.

In 2016 the rain poured down on the course, and those small Croatia back-roads really don't have great drainage.  I was hoping the threatened rain would stay away and it did.

TIME OF YEAR
In the three days before the race and two days after we had several downpours, with thunder and lightning.  Zagreb was flooded. 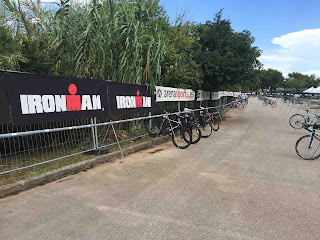 The night before the race, the organisers emailed everyone who had checked-in their bikes to say, "come and get them out again".

Storms were forecast and they warned they couldn't guarantee bike safety, even though those storms had been forecast for several days.

This last minute change caused a few headaches for competitors.  Some complained on Facebook that they were staying well outside the city and couldn't come in.

The organisers insisted they could make no provision for bikes left in transition and could not guarantee their safety.  Then guess what?  The next morning they announced they had safely stored overnight all the bikes that hadn't been collected.  They did precisely what they said they couldn't and wouldn't do.  Hmmm again.

So how unusual are these high winds and rain storms?  Well, every year so far it has been windy.  In 2016 the rain swamped the race course, both the bike and run sections.  If our storm had come twelve hours later it would have been a repeat performance.

Here's what one competitor wrote on his blog about that 2016 run: "The roads were flooded with ankle deep mud and water. I debated taking off my shoes because they were full of mud and so heavy. The rain was blinding, cold, and stinging my face."

All races can have problems.  Having been there, my impression, rightly or wrongly, is this one has more than most.  I'm not saying it's badly organised.  Nor am I saying don't do it.  The atmosphere is very friendly and the support on the bike course is excellent.

All I'd suggest is you spend time reading race reports and fully appreciate what has happened in previous years before spending your money on this expensive Ironman brand event.
Posted Monday, October 09, 2017