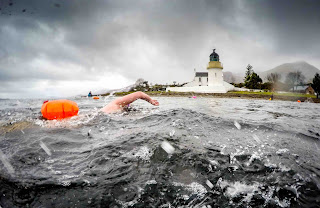 Last year I became one of the Trustees of a newly created charity, Highland Openwater Swim.

It's aim is to run small, friendly and challenging wild swimming events that are affordable to everyone while raising money for a nominated charity.

I had been taking photos or swimming at most of the 2016 and 2017 events and I live near two of the other trustees.  We're very much and Ardnamurchan based group.

However, in 2018 we were late in publishing our swims because we were waiting for our charitable status to be approved.  Consequently I was booked for filming work on almost every weekend that a swim was subsequently planned.  I was disappointed not to be at the Falls of Lora swim Saturday just gone. 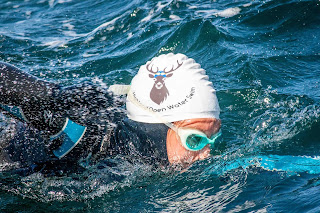 A few weeks ago I sat down the two other Trustees and worked out which swims we wanted to offer and in what order.  I feel the order is important, because we should be offering a ladder, a series of progressively harder challenges, so people can grow in confidence with the swims they undertake.

Then I pick weekends which are closest to Neap Tides when smaller volumes of water are moving.  At neaps the tidal streams are almost always less powerful so slower swimmers are less affected. 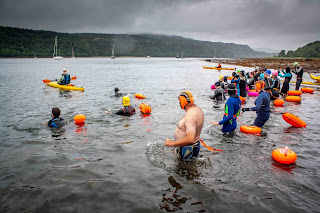 When there are two possible weekends in a month, I go for the one with the best slack water.  Our proposed Corran Narrows swim in January 2019 is a perfect example.  Two Sundays. the 13th and the 20th, are each 3 days off neaps.  The relevant slack water at Corran is 10:10 and 11:20, which are both good times of day around which to base a swim.  However, the 11:20 slack comes before the flood i.e. the water will be pushing north through the narrows, so slower swimmers would be carried towards the Corran Ferry - not good.  Slack water on the 13th is better because it comes before an ebb, so slower swimmers are carried away from the ferry.

It's not confirmed, but I suspect we'll pick 13th January for our first swim.  I've done calculations for ten swims in 2019 all of which will be coming to the HighlandOpenwaterSwim.com website in due course.