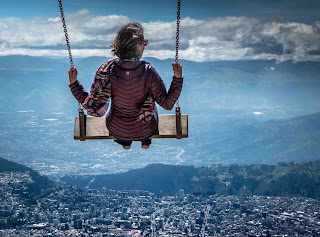 As part of a superb swimming holiday in the Galapagos and mountain biking holiday that took in the high volcanoes and Amazon jungle, we stayed in Quito on three separate occasions.

Video and story of the mountain biking coming next week.

We learnt a few things which I thought it might be helpful to pass along to visitors.

The airport is about an hour's drive north-east of the city and a genuine taxi (they have people in arrivals) will cost $25-$30.

Bounded by the sides of a valley, Quito spreads 80km along a north-south corridor and looks massive, but in places it's only 4km wide and home to fewer than 3m people.  A metro is under construction to link the north with the south.

Quito sits at around 2800m so it's likely you'll feel the altitude.  A headache and shortness of breath is common. 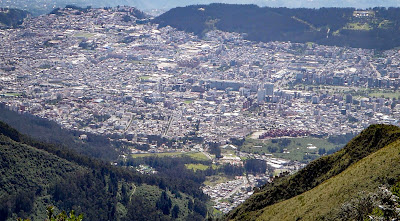 The old town is a very busy place, swarming with tourist police and consequently fairly safe, although pickpockets operate everywhere.  Every visitor will want to go there, but if you're here for a few days, it might not be the ideal place to stay due to noise, expense and diesel fumes. 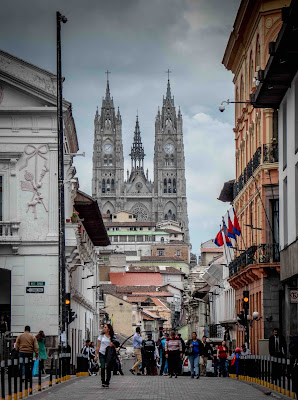 We stayed just south of the Old Town in Wantara Garden Suites.  These were excellent value.  We could save a little cash by preparing our own meals, and they allowed us to store a bag of mountain-bike kit while we were in the Galapagos.  While we could walk to the Old Town in 15 minutes, the housekeeper advised us the immediate area around the suites is not safe after dark.  There are no places to eat or drink in the immediate vicinity.  The one we liked best in the Old Town is Tianguez which has an excellent crafts shop alongside.

Walking back at dusk one night, the police stopped us, then gave us a ride back for our own safety - a blue-light taxi!  Also, a couple of Canadians who were staying there seven weeks had lost two backpacks, one snatched from a table during a meal, the other in a more harrowing incident.

Our preferred place to stay was in the La Floresta area of the city.  Casa Aliso is a lovely hotel with great staff and excellent breakfasts, the only downside being relatively thin walls between rooms.  If someone flushes a loo or takes a shower, you hear it.

Walking around La Floresta felt safe after dark and there are loads of places to eat, including a couple of vegetarian and vegan restaurants.

Opening times seem a bit weird mind you.  Tandana behind Hotel Quito was our favourite, with great vegan food and a superb view.
The other tourist area is the Mariscal centred on Plaza Foch.  It is all bars, restaurants and night clubs.  If you take a room here don't expect to sleep much.  Some folk stayed north of the big Carolina Park but we didn't venture into this business area.

Air B&B has transformed the accommodation market here as in many cities, and not always for the better.  Carefully check the reviews.

Taxis are everywhere and relatively cheap.  A couple of dollars for a ten minute ride.  Uber is in the city (and Uber eats) but on the one occasion we booked an Uber it failed to arrive on time, then switched to a second driver who was going to be 30min late, and cost me 50c to cancel.  Don't use Uber here.

The open-top bus tour was worth doing, if only for the drive to the Virgin de El Panecillo and the view over the city.  Traveling to the north end of the city was less fun, caught in Quito's traffic belching fumes. 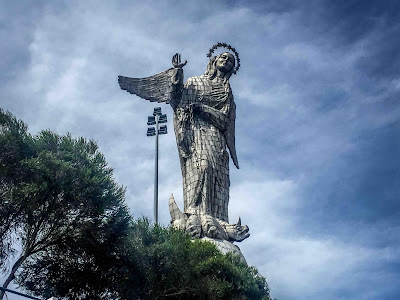 The other tourist ride we took was the cable car to one of the surrounding hills.  You can stroll around the top for an hour, or with the correct kit, tackle a five-hour climb to the summit.

Initially I thought sightseeing from a gondola station would be a bit lame.  I was wrong.  It was exceptionally good and Liz got to swing over Quito at 4100m 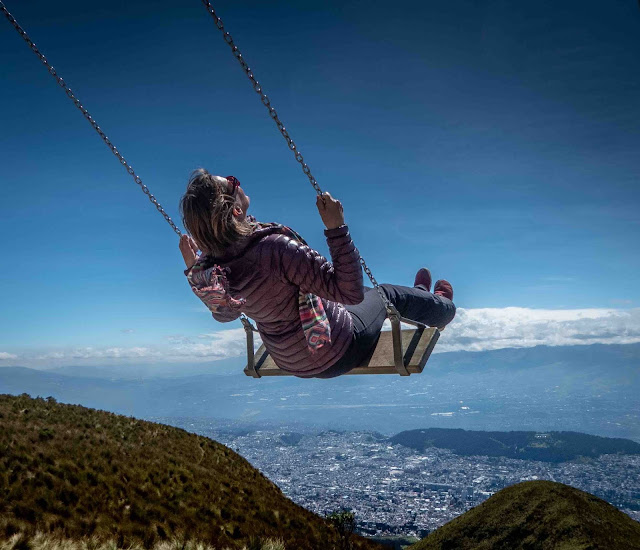 Really, you are sharing a nice article which is very interesting and useful for us. I pay the special thanks to you.
quito city tour guide ecuador

You're very welcome tourguide - it's a lovely city.


If you haven't already done so, check out this post with video of a 5-day MTB tour in the area around Quito
https://simon-willis.blogspot.com/2019/03/ecuador-5-day-mountain-bike-tour-with.html