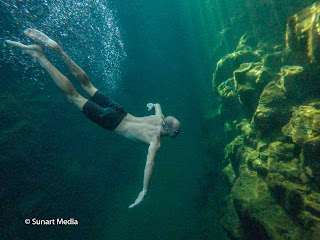 Swim with the marine wildlife of the Galapagos and you will never, ever forget it.

Our holiday with SwimTrek was not cheap.  Yet the experiences of this week will flash across my fading memory years from now.

If you're considering it there were a few practical aspects of this SwimTrek holiday in 2019 which you might benefit from knowing in advance.

I'll add them as we go.  Oh, and if you wish to see more of my photos, check out this album.

The wildlife which inspired Darwin's thoughts on evolution by natural selection now inspire plane-loads of tourists - sometimes up to 9 aircraft each day.

It would not surprise anyone if access to these Pacific islands was soon restricted, either by permit or by price (or both).
Despite those numbers, the beauty of the SwimTrek approach is that we rarely saw another tourist during the day.

Our group of 16 swimmers was split daily between two fast boats, each with its own SwimTrek guide and each with it's own Galapagos-born naturalist guide.  This combination of expertise is highly successful.
On our second day, heading back from seeing all manner of wildlife, our guide Kelly suddenly yelled "Dolphin!"  Within minutes our boat-load of swimmers was in the water trying to spot and swim with the small pod.  I was making unusual noises under the water, thinking it might make intrigue the dolphin.  Later Tim, the guide on the other boat asked "why were you making goat noises while you swam"?

This holiday is not all about the swimming.  On Croatia and on Montenegro SwimTrek holidays there have been a few folk who were there for the speed, the distance and the training.  Here you leave that attitude at Heathrow.

In fact, some of the best swimming was done with a snorkel and flippers.  You want to be head-down looking for the next exciting marine wildlife.  So that's the first tip - take your own fins (training will do) and a snorkel.  The boats have both but tend to be longer fins and can cause cramps.

Distances are short - our longest was 4.5km but it was so heavily assisted by the tidal stream it felt like 2km.  When a shout goes up (eg "Turtle!) everyone stops and treads water face down.  The fins help you quickly re-position and follow what's been sighted.

It's a two-island holiday; Santa Cruz is the largest and busiest, while Isabela has more of a Caribbean relaxed feel to it.  That said, the hotel on Isabela is arguably nicer, right on the beach.  I won't say too much more because part of the holiday is to make discoveries.

However, you do need to know about Galapagos Bingo.  I was a Manta Ray short of a full-house.  You get the idea.  There were a couple of land-based excursions too, one of which took us around a colony of flamingos. 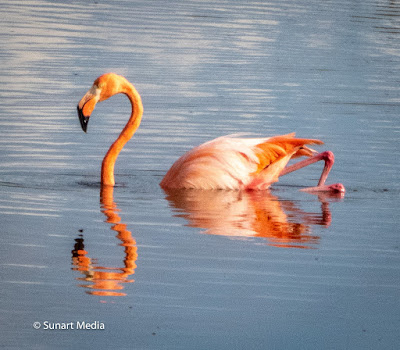 Our Naturalist Guides, particularly Pico and Gustavo, were exceptional.  Not only knowledgeable, they clearly had a genuine passion for sharing that knowledge.  They were great swimmers too.

Pico's father started the first dive holidays in the Galapagos, using shore based hotels and traveling to different islands daily, much as we did with SwimTrek.  Pico told me this was at a time when almost all tourism was run from live-aboard boats where visitors rarely came into contact with any locals.  The Galapagos was presented as devoid of humans.  Initially, this was thought to be the best way to preserve the unique wildlife.  However, the human community was going to develop regardless of that wildlife, so the best way to preserve the unique nature was to involve the locals, to give them a financial interest in tourism and keeping the wildlife pristine.

So to practical matters.

Flights.  Price isn't everything - consider the type of aircraft used.  We flew across the Atlantic with Avianca because our pilot friend advised the Boeing 767 Dreamliner had much better air quality and seat space than alternatives we considered (KLM).  Plus we paid £100 more for extra leg-room both ways.  The downside of Avianca is an aircraft transfer in Bogota, Columbia.  Technically this is a Yellow Fever country, so to arrive in Ecuador from Columbia one needs a Yellow Fever certificate - fortunately we had these already.  No-one seemed to check.

Route.  Some swimmers flew in specifically for the holiday, then flew home.  You can route through the Ecuadorian capital Quito or the coastal city of Guayaquil.  We made a three-week holiday of the Ecuador trip, starting with two days in Quito pre-Galapagos, three days post-Galapagos, added a five-day mountain bike based tour, then two days again in Quito before heading home.  I'll write more about Quito separately.

If you don't want to explore Ecuador, or can't spare the time, a direct flight to Guayaquil missing out Quito altogether is probably a better option.  One of our group who did this reported no queues in the airport for the TCT (see below) and, because the city is at sea level, none of the altitude related headaches and sickness which can come during a short stay in Quito.

Flights to the Galapagos.  I've suggested SwimTrek emphasises the regulatory requirements to fly to the islands, because you need a specific piece of documentation, the Transit Control Card (TCT in Spanish).  In theory you can pre-register but because SwimTrek doesn't provide a hotel code (unlike Booking.com) it doesn't work.

So in Quito you must queue at the domestic terminal for up to 90 minutes (we were early and it was still 45 minutes) clutching your passport, your hotel reservation document, your travel insurance documents, and your return ticket.  It is absolutely essential to have print-outs of these.

Tour groups get all this paperwork done for them, and it's their local leaders who delay the queue, as they walk to the front clutching fist-fulls of passports.  We saw a few passengers in a panic who had not allowed sufficient time and were in danger of missing their flight.  After 45 stressful minutes we reached the front of the queue, but when the woman at the desk saw our SwimTrek print-out showing our hotel reservations, she assumed were were part of an organised group.  "Your agent will do all this", she insisted, handing our passports back without the precious TCT.  She took some convincing before we were given the document.

Then are you allowed through to the section behind this kiosk to have your bag checked (for organic material) and sealed.  Only then can you check-in.  You cannot check-in online for the Galapagos.  Some airlines fly via Guayaquil, where some passengers get off/on but through passengers don't. 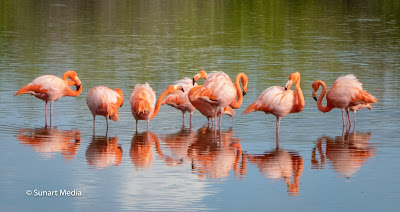 Other flight.  In the middle of the trip, when we switch islands from Santa Cruz to Isabela, there's a rather loud, somewhat uncomfortable 2 hour fast-boat transfer.  Three of our group elected not to endure this on the return journey but to fly, arranging this locally for about $200.  It cuts out the 2 hour fast-boat, a bus ride across Santa Cruz, and a short, busy ferry to Baltra Island where the main airport is located. 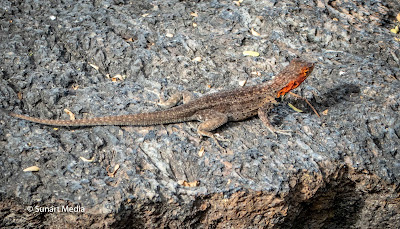 What to take.  Think of how much sunscreen you'll need, then double it.  On the Equator some women in our group suffered particularly from butt-burn.  The flesh below a swimming costume is as vulnerable as neck and shoulders and the sun extremely strong.  Quite serious burns are not uncommon.  Longer length swimming shorts or jammers, plus at least two long sleeve rash-vests (tight ones which won't fill with water) are absolutely essential if you're going to swim 'skins'.

Liz knows she's vulnerable to sunburn, so we spoke to Ben at SwimTrek when we booked.  We both bought 'sting suits', 1mm dive suits that completely cover the body.  These worked well for us when openwater swimming.

I also took a  BlueSeventy sleeveless wetsuit because I'm not a great swimmer and like the extra buoyancy.  However, I had to wear a high-neck rash-vest under that suit because the salinity of this part of the Pacific could easily cause neck and arm burns from the suit.  At no point was I too hot in either the sleeveless wetsuit or sting-suit.  Indeed, swims from Isabela are close to submerged volcanoes where cold water up-wells from the deep.

Aqua shoes, despite being on the kit list, are pointless because you have to remove your shoes as you get on the boat each morning.  Keen sandals with toe protection or Tevas are more useful as they can be worn elsewhere.  Again, I've suggested SwimTrek update their kit list.

Here's a map of all the swims we tackled.  They're spread out, because the Galapagos Islands are spread out, but zoom into any  you'll get an idea of the amazing scenery we enjoyed.

Sorry if it's not responsive on phones.

Really useful information. Thank you so much for sharing