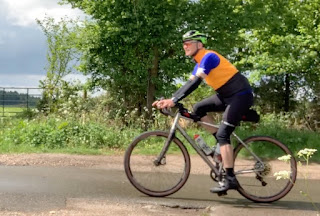 This is my new gravel bike, a Sonder Camino Ti.  That's the titanium version of Alpkit's popular Sonder gravel bike.

Initial impressions are that it is staggeringly good value.

I specified the top of the range build and it cost £2349.

That's slightly cheaper than listed because I swapped the forks from all carbon to carbon with a aluminium steerer, allowing me to add a front mudguard.  This bike will double as my new winter bike, the titanium frame being ideal for Scotland's winter conditions.


As you'll have read, I was looking and trying to buy a Kinesis Tripster but that would have cost £1000 more than this bike.  I had set aside the cash for it, so I treated myself to a Stages powermeter crank, sent it to the Alpkit team, and they added it during the build.

I collected it as I drove past Nottingham last week. We're house-sitting in Richmond (again) which isn't the best place to try a gravel bike, but hey-ho, I'll be back in the highlands soon enough.


In the meantime, this video records my honest first impressions during my first real ride.  (I went to the shops on it the day before and punctured the tyre with a bit of glass - that doesn't count as a ride!)  My views will undoubtedly change as I ride the bike more.  {edit - on the next ride I felt a little stretched out, so I've flipped the stem and moved the saddle - the result is much better.}

Just a disclaimer about the video.  I cut it on my iPhone so the result isn't quite as smooth as I'd like, but I will tidy it up once I'm home and on my good MacBook Pro).

Nice bike, but did you get to demo it first? I'm just about to google the Sonder, while much cheaper the cost of having the Kenesis to demonstrate must contribute to it's higher price point?

AlpKit do an amazing demo deal - they’ll post you a demo bike! The details are on their website

I put a request on the Sonder Bikes Facebook good to ask if anyone had one near me in Scotland and within a couple of days I had a quick ride on one. That was enough for me to work out 1) I liked it and 2) the correct size.

I would have liked the Kinesis but I’m very please with the Camino.

Having saved up most of the cost, the 15% bank holiday weekend discount enabled me to order mine. I thought I would be clever by swapping to the forks with the mudguard mount hole...but have just seen that you got there first. I've also gone for a smaller chain ring as Im 70 and have atrial fib. Top end performance is of no consequence to me any more. I feel more like 17 waiting for it to arrive!

Amazing how bikes can make you feel!

I decided it was a time machine. I was transported back to the days of my first mountain bike, such was the sensation of joy.

I've not used the mudguard mounts yet but expect they'll be handy this winter. I've also made enquiries about a smaller chainring too, as some of the off-road climbs and clubs with luggage are a struggle.

I hope you have as much iun with yours as I'm having with mine.