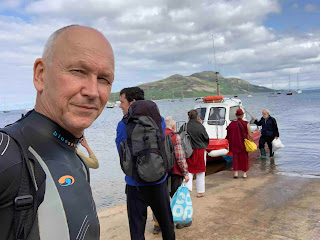 I recently posted this photo on Instagram.   I made the (slightly flippant) comment that a ferry ride to Holy Isle off Arran, then a 3.2km solo swim back, probably wasn't ideal preparation for the next day's cycle race.

More on the Grinduro event later.

After the swim a few folk were a surprised I did it by myself with apparently no safety measures.

So I felt I should quickly explain this wasn't a spur of the moment thing and I had contingencies.
Firstly, I had checked the Admiralty Pilot, Clyde Cruising Club and Imray sources of information to understand tidal flows through Lamlash Bay.  I checked the distance map and, although on the Ordnance Survey looks like the swim would be just over 2km, I guessed the tidal range and my slightly wobbly track would make the swim nearer 3km.

I'm perfectly comfortable up to 4km, so I had 1km in reserve.  Had I been daft, I've have tried to swim there and back - just over 4km on the map.  But that would have left me no reserve, so I rejected that idea. 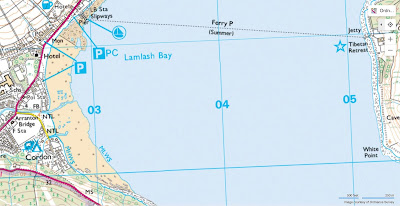 I'm going to jump ahead now, because my GPS watch recorded the swim as 3.2km.  I'm not entirely sure about the accuracy though, because the track loops back on itself and, at one point, zigzags wildly.  Also the OS map shows a lot of beach on the Arran side, much of which was covered when I arrived making the swim longer.

All of this preparation was part of my safety plan.  Here's the Komoot track of my swim. 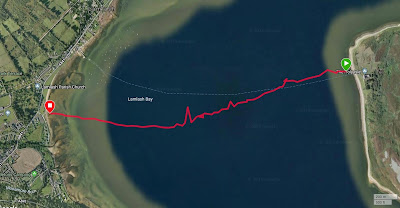 When I drove into Lamlash I went to the Holy Isle Ferry office (err, cabin) to check they were happy to give me a one-way ride and the time they'd depart.

The wind was from the North West and, while only about 14mph, I had learnt from the tidal information sources that winds from this direction can affect sea conditions in the bay.  Although it looked calm when I made my first visit to check conditions, I felt it would be choppy further out and it was.

There's a clear kink point in my GPS track.  Until then I couldn't see the shore because the waves were too high, so I was sighting on a hill.  At that point, when I could see the spire of Lamlash Parish Church, I switched my track and swam towards it.  This also probably increased the distance I swam. 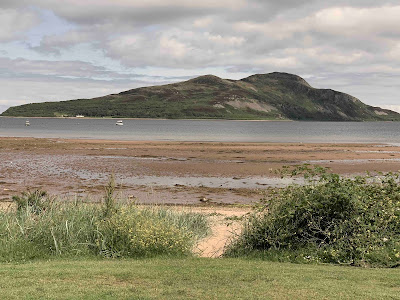 I was all too aware that holiday makers on Lamlash sea front might see me in the water and mistakenly raise the alarm, wasting the time of rescue services.  I had planned to telephone Belfast Coastguard, but I noticed a local Coastguard Office.  Once I was dressed in my wetsuit (pulled down to my waist, wearing a thin t-shirt so I didn't look a complete idiot) I called into the Coastie's to talk through my plan.

I explained, I had a high-vis tow-float to which I had access during the swim.  Crucially, I carried a Personal Locator Beacon - a PLB.  In an emergency this device (a McMurdo Fast Find Plus) would send a digital Mayday along with my GPS coordinates.  They asked about timings and I explained it would take me an hour in flat water, a little longer if it was as rough as I expected.  I offered to call Belfast CG and was told, "if it puts your mind at rest please do so, but they'll just ring us".  I thanked the team and explained I wouldn't make that call.

In addition to the PLB, which incidentally was in a separate dry bag inside the tow float, I carried my phone (double dry bagged) and the shoes I wore to the ferry and from the shore, plus that thin t-shirt. For when I got out of the water I had a warm hat and a mini flask of hot tea, just in case I was very chilled.

Back at the ferry I discussed the crossing with the captain who was happy I had spoken to the CG.  I emphasised I did not want him to feel in any way responsible for me, but he said, "I'll keep an eye on you too".

On the ferry I updated my personal safety plan and identified two main areas of risk.  The biggest risk was being hit by a speedboat which I'd seen earlier but of which there was thankfully no sign.  The ferry man had to make two crossings, so I hoped he'd use his VHF if that boat returned.

The other risk was of being stung in the face by a Lion's Mane jellyfish.  I hadn't appreciated just how many there were in Lamlash Bay - thousands!  Very large ones too with long tendrils.  In the event, I did get a small sting on my face from one, but it was fine by the following morning.

Sorry this is not the most exciting of posts but I felt it important to mention that this wasn't just a casual, easy made decision to jump onto a ferry and swim back.
Posted Sunday, July 14, 2019