Swim to the Saint's Island, Video 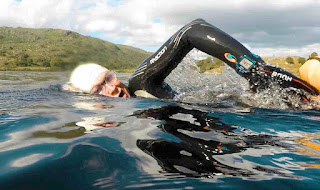 There is an ancient Scottish belief that evil Spirits cannot cross water.

That's why so many important burial places are on islands.

The islands in Loch Leven, the Glencoe Islands, may be the best known.

But the Island of St Finan in Loch Shiel is surely one of the most beautiful, if only for its location.

It also gives Glenfinnan it's name.  I doubt that's realised by many of the thousands of visitors to the National Trust's Glenfinnan Monument and nearby Glenfinnan 'Harry Potter' Viaduct.

We've kayaked to St Finan's Island, (Eileen Fhianain) but we felt it would be rather special to devise a swim which allowed us to cross to the island, explore the narrowest part of this fresh water loch, then head off back to where we started.  The walk in, carrying all out kit, was a mile and a half from the end of the road at the Estate Pier at Dalilea.  The hike makes the islands less accessible than the Glencoe Islands, and it's all the better for that.

Despite its relative remoteness, it seems some awful person has stolen a historic bell, hundreds of years old, that was chained to the altar on the island.  As you can see in my photo - no bell.  This theft was made public by the BBC on the very day I've published this, which is a complete coincidence.  It wasn't us!  I wasn't sure whether it had been removed for safekeeping.  The bell is supposed to be cursed, so Heaven help these who took it.

We swam back to the car making the whole thing around 3km, but it could easily be shortened by ending at one of the bays along the north coast.  You could even stash a flask of hot drink as you walked in and turn the whole thing into a picnic.