Bikepacking - What's It Like & What Kit To Use. Video. 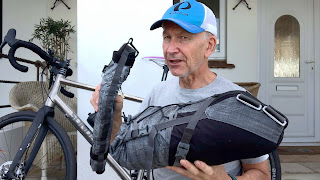 Bikepacking has been around for a few years now and the equipment involved has matured, so I thought I'd give it a try.

Scroll down to watch the video of my ride.

I didn't head off into the wilds of Scotland.  For me that would be too easy, because they're my playground, like a second home for many decades.

Instead I rode a route between London's commuter-land and the holiday resorts of the south west.  I planned it using the (fairly new) mapping service Komoot which I shall review soon.  I made a couple of films while riding so I could share my equipment choice and my first experiences of bikepacking.  I paid full price for everything I used.

I'm no stranger to ultralight backpacking.  Liz and I hiked from Mexico to Canada with minimal lightweight kit, following the Pacific Crest Trail.


But other than one Polaris event, most of my multi-day cycling adventures have involved touring bikes and panniers.  A couple of years ago we rode down the Western Isles from home with just small bags but then we stayed with friends and B&Bs, so it didn't count as a full-on camping tour.

Panniers can be a pain.  In a head wind they work like a drogue parachute, holding you back.  In the Pyrenees I once had to push a bike downhill, the headwind was catching my pannier so strongly.

Poorly packed, they unbalance a bike.  Even when properly packed, corners have to be taken with great care.  Squeezing through narrow gaps or pushing through a crowd can be a nightmare.  They're heavy and so are the racks which hold them.  If you have to lift the bike, over a gate or onto a ferry, forget it - those panniers have to come off their racks. 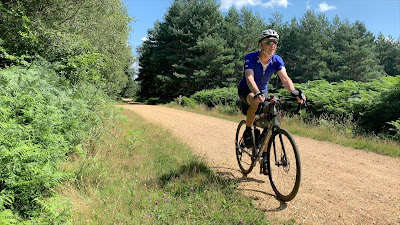 The key feature of bikepacking is that all the equipment bags are fastened, not onto racks, but directly onto the bike frame.  Some touring cyclists swear by big saddlebags, strapped width-ways under the saddle.  Bikepacking bags also fix under the saddle but extend backwards, so they never catch the wind.  There are also frame packs of different sizes, some of these filling the entire front triangle so you'd find somewhere else to hold your water bottles.

Up front, roll-shaped bags strap directly to handlebars.  On bikes with straight or even flared handlebars these bags can be very large and often have waterproof roll closures at both ends for easier access.  With regular drop handlebars bags of smaller width are necessary.