Komoot - Is It Any Good? Video 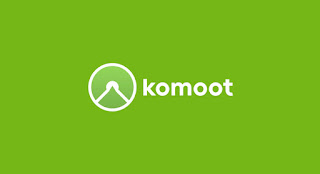 Komoot is a relatively new mapping app for hikers and cyclists.

It hails from Austria/Germany, was started around 2010, and boasts 8m users worldwide.

So decided to test its ability to map a touring route in a busy part of England and you can watch the video of that test below.  Incidentally, if you'd like to read the background media briefing for Komoot, you can download a copy from their website.

Komoot offers world-wide mapping for £30, but if you resist buying immediately, it seems it won't be long before you're offered it for £20.  That happened to me and two other folk I know.  Which is significantly cheaper than Ride With GPS!  It costs $50 or $80 a year, although the free level is good enough for most purposes, so I suspect the folk there are sweating.

Komoot is a smart overlay on Open Cycling Map, which anyone can edit like Wikipedia.  So if something is wrong, change it!  It has two particularly strong selling points, so naturally these were the points I wanted to test.

The first is its ability to pick the best route for hiking, mountain biking, gravel biking, cycle touring and road biking.  Using it in Scotland I'd found quite a few problems off road.  Komoot is very keen to stick to known Rights of Way, which in Scotland have entirely different legal definitions than in England and Wales.  However, I hadn't really detailed those issues and it wasn't something I wanted to star by testing.

So I tested the cycle touring option on a 110 mile ride in the south of England.  I rode from Richmond in London's commuter belt down to Poole in Dorset on the south coast.  It would take me through a couple of large towns and one major city (Southampton), so quite a test.

Komoot was largely successful at keeping me away from busy traffic, with the exception of one spectacular fail.  You'll see that in the video.

The second USP is Komoot's ability to transfer routes directly to a Garmin GPS.  Plan them on your desktop or phone, save them to Komoot.  Link your phone to your Garmin.  Open the Komoot Garmin IQ App.  This proved very useful when, mid-ride, I wanted to change the route Komoot had picked for me. 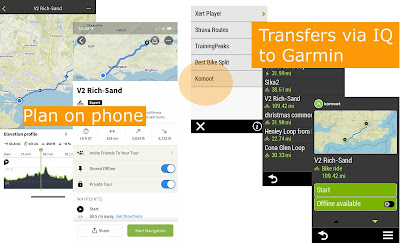 Your planned route should be available to download to your Garmin as a course.  The only pain with this is you have to end an activity before opening a Komoot route, so if you're part-way through a ride, you'll have to stop the recording and start again after you've done the transfer.

This was my first ride using Bikepacking gear and if you'd like to learn more about what it was like, plus the equipment I used, take a look at the other video I shot on the ride.