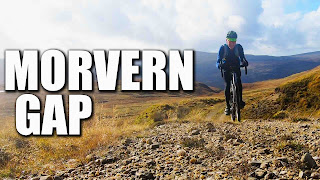 Since buying my gravel bike in May I've seen our part of the Scottish Highlands in a different light.

I've cycled most of the roads - there aren't that many.  I've hiked lots of the hills, which are mostly too steep to carry up a heavy mountain bike.

But with the light gravel bike I'm seeking out new through-routes - or at least new to me.  Ideally they'll all be on rough tracks or rideable paths with the minimum of pushing and carrying.

I'd been looking at the area of Morvern from Rahoy to Laudale for a while.  There are a few old Rights of Way in there, and I've done a couple, but all seem to involve quite a bit of carrying.  Then I spotted two forest tracks which head deep into the interior and come within a few kilometres of joining up.

This is what I called the Morvern Gap.  Except, it's not a gap at all.  The roads DO join up and give a fantastic route, almost all of which is rideable - the route mapping is below.  The Ordnance Survey and other mapping systems simply haven't caught up yet.  How do I know this?  Watch the video to find out.