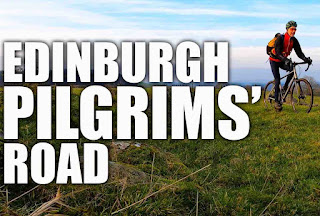 When I saw 'Old Edinburgh Road' on the Ordnance Survey map I knew it would be a great route to try to cycle.

When I didn't realise at the time was how important this had been as a pilgrim route, then coaching route to Port Patrick and Ireland.

We had a short break in Dumfries and Galloway towards the end of 2019 and, driving around, I saw streets named Old Edinburgh Road, so I knew it stretched quite a distance.

I had to try to follow it, and you can see how that turned out in the YouTube video below.  I think it's one of the best I've made to date,  so if you like it, please subscribe to my YouTube channel.


The excellent Heritage Paths website says of this route, "It would have seen a huge amount of traffic in medieval Scotland, much of it consisting of pilgrimages to Whithorn Priory. Indeed James IV was a regular pilgrim and so would have used this route. Later it became the coach road to Port Patrick."  You can see the old route from before the reservoir was built on older maps here.

Now it's probably best ridden in the opposite direction.  Gravity will help you down a steep, off-road bad track where I had to push.  Also the section where I got a little lost (you can see my confused track) will be much easier to navigate.