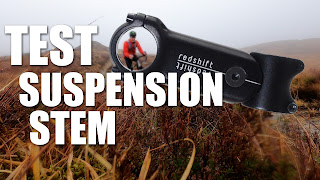 This is an old idea, rejuvenated for a new era of cycling.  My initial thoughts are that its pretty good.

Redshift Sports make a few niche cycling products and have sent me a couple of them to test.  You can see the first test in the video below.

The first is this suspension stem - a stem with two elastomer inserts that provide different degrees of 'bounce' depending on your weight, type of bike and terrain you're riding.

I get pain in my thumbs, which a specialist says is tendon overuse but I suspect there's also some arthritis at work.  It's why I can't get on with flared handlebars - they require too much torque on my thumb to shift gears. 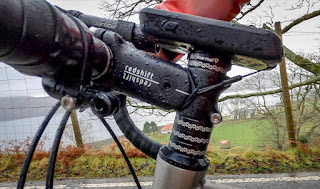 On longer, rougher roads my thumbs scream at me.

So I contacted Redshift and asked if I could test their stem, make some videos of it (and photos), and if I like it, buy it.

The video below was the first test on an excellent new-to-me route across Ardnamurchan, but I really need to try it on the roads which bash my thumbs to bits.

So while I'm not yet convinced, I'm initially impressed. 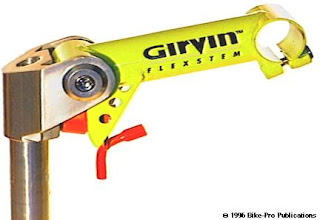 This is not a new idea.  The old Girvin Flexstem, now considered a vintage product, worked on similar lines.

It was superseded by Suspension folks and is now slightly sneered at by those who felt it was, well, crap.

When Redshift introduced the first generation of their new iteration, MBR magazine compared the two in an article here.

Yet this back-to-the-future vibe is exactly right for the way many of us use Gravel bikes and I'll explain why.

When I first rode an MTB in 1987 everything was fixed and rigid and none of us had a clue what we were really doing. 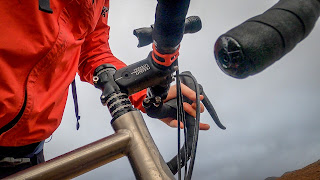 However, there was a pure, unadulterated joy at taking your bike down tracks that would break even the best touring bike (my old Dawes Galaxy).

This was before the sport of mountain biking sub-divided like an out of control amoeba and developed highly specialist tech for each discipline.

Back in the day it was pure and simple and I loved it.  That joy is what the gravel bike has rekindled in me.  Except with age, my thumbs now hurt.  So it's entirely appropriate that Redshift has taken an older idea and re-engineered it with modern components and materials.

The suspension stem is absolutely not a substitute for suspension forks.  If you need those you should be on an MTB.  It's just to take some of the buzz, the vibration, out of the longer rougher rides.  So far, it's working well.  Buy one here.  Oh, and this was a damn fine route too - map below.