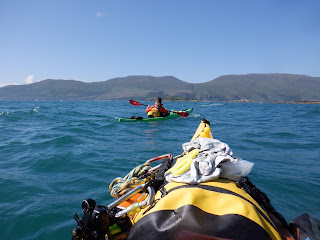 In June/July 2021 Hannah and Frodo completed the whole trail in under two weeks.

They have some great advice for doing the shuttle at the end of the trip, and some warnings for anyone thinking portages around tricky bits might be easy - they're not.

Hannah has kindly allowed me to publish her email to me, because I think others will find it helpful.

In the spirit of helping others, I'll put her most practical comment first:

Checking in at Ardmair Campsite allowed us to find a safe place to leave our kayaks whilst we went to get our car back.

In terms of car shuttling logistics the quickest way to get back to Tayinloan turned out to be to get the coach from Ullapool to Inverness and then hire a car to compete the rest of the journey, returning it the next day whilst on route home. The car hire worked out at the same cost of a bus ticket for two people and took 4 hours off doing the whole trip by coach, allowing us to compete this round trip in one day.

That's a very useful, potentially cost saving tip, so thanks Hannah.  Here's the rest of her email and a little from a follow-up she asked me to include. 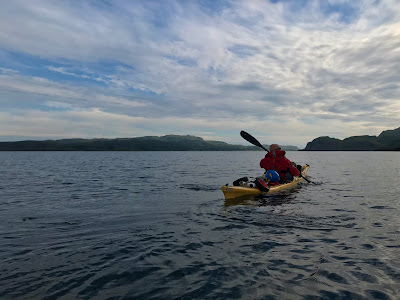 We’re just on the way back home having completed the Scottish Sea Kayaking Trail.  We started on the 22nd June in Tayinloan and did the whole route in a single push finishing at Ullapool yesterday early morning (5th July).

We just wanted to say awesome book and thank you for providing us through it with the idea for this epic adventure.

We were hoping at this stage to recommend some portage options to avoid crossing around headlands and high winds but unfortunately we can’t really recommend any of the following;

We portaged from the end of Loch Sween to Loch Crinan after sitting out a day of rain at Kilberry Head and not wanting to loose out another day to strong north westerly winds. This portage however turns out to involve the negotiation of a very steep and slippery embankment at the end of the Loch. 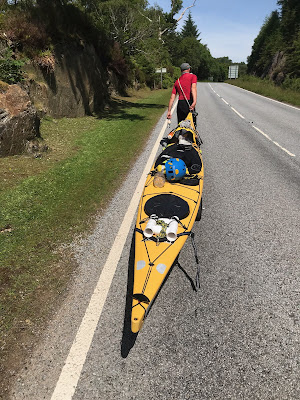 Four days later at Ardnamurchan Point high winds forced us to detour down Loch Sunart and portage the next day from Salen to the River Shiel at Ardshealach. A most enjoyable detour with bacon butties and coffee at Salen and an ice cream stop before launching at the pier on an outgoing tide. 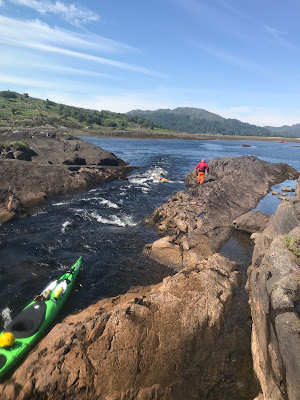 That is until we encountered an unexpected 8ft drop, which would have made a nice Grade 3 whitewater rapid, barring our access to the south channel off Eileen Shona which as the river appeared to be tidal was the last thing we expected. Remember the bacon button and ice cream... yeah we should not have missed high water.

We press ganged our throw lines into action to repel the kayaks down the rapid, climbing down behind and enjoyed the rest of the day thinking....well not quite sure what we were thinking. This is an awesome portage depending on our appetite for white water rapids. 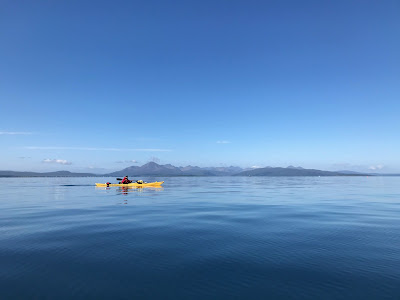 We finally reached Mellon Udrigle on the evening of the 3rd July falsely thinking we were pretty much there and woke up the next morning to smooth seas. Setting off to the Summer Isles the conditions drastically changed with force 4 wind gusts coming in several hours ahead of the forecast. 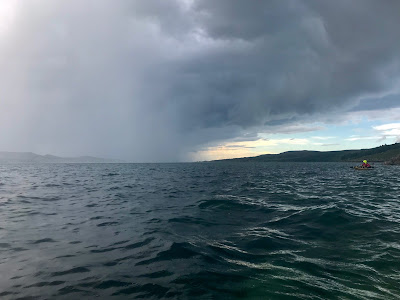 So we decided to bail for Ullapool. When crossing the mouth of Little Loch Broom we realised something was up when a sailing yacht passed us heading hard for shore to shelter and figured we better check the weather forecast, which now implied our location to be right in the path of an incoming thunderstorm. 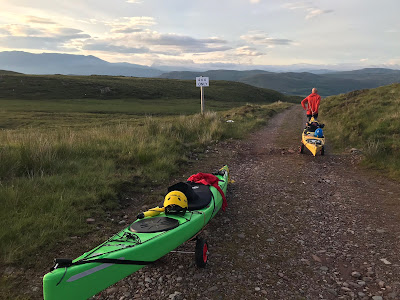 Looking at the map we decided we couldn’t really fail so short with only 10km to go and an obvious solution would be to portage from the campsite at Badrallach over the hill to a jetty at a hotel shown on our 1997 eBay acquired OS map.

Well, it turns out this portage involves (beside the obvious height gain of 270meters), the negation of a locked 5 bar gate and a gravel track down the hill signposted as only suitable for 4x4 vehicles. And if you were hoping for a pint it turns out the hotel is permanently shut. We had happened to meet the owner at the top of the hill and he kindly gave us permission to launch from his garden/pier.

So far the day had involved some rather rough water, getting completely drenched in a thunderstorm having clambered ashore to escape the lightening and spending the best part of 4 hours pulling two fully loaded sea kayaks up to a spot height of 230m. All this to have both trolley axles break within the space of 25m of each other whilst Ullapool's lights were mocking us from only 2km away across the bay. This portage is definitely not recommended unless you are training for a Strong Man competition as even calling it “leg day” does not do justice to the effort involved in what followed next. 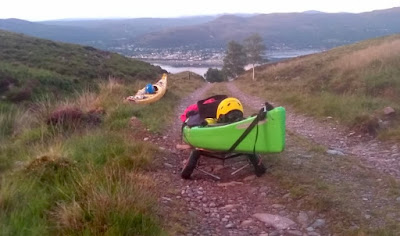 The trolleys, purpose built for this trip, had so far survived 18km of pothole-ridden roads without any complaint and had allowed us to leave the car in Tayinloan and attempt the whole trip as an unsupported continuous push endeavor. This also meant we were now slightly stuck.

So we unpacked our kayaks into IKEA bags, carried each kayak down separately the remaining 1.5km to the pier and, having walked up the hill yet again for the third time to collect the bags, decided that we might as well camp here as 1am is late enough. After three hours sleep we lugged our remaining belongings down the hill to load up the kayaks one last time to finally make it to Ullapool yesterday after 14 days of the most enjoyable kayaking experience.

We would be interested to hear if you are aware of others having done the trip as a continuous self supported push and if so how long it took them.

The only problem now is it’s going to be a challenge to find a holiday that tops this one.

Of such stuff is adventure made.