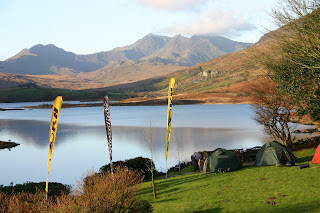 It felt like the gathering of a strange, diverse clan. I came to sea kayaking from a mountaineering background so I don't hang out with other types of paddlers. Oh, I've chatted to river paddlers and I've seen open boaters pass with their craft on their car roofs, but unless they're on the water in a long, pointy boat, there’s rarely a chance to sit down and talk paddle-sport with them. It’s my loss, of course.

The first Expedition Symposium a Plas y Brenin demolished such barriers. It showed me what more all-round paddlers probably already knew; that we have more things which draw us together than push us apart. All praise to Pete Catterall, Senior Instructor at PYB, and all the team of speakers for delivering a symposium which could be all things to all paddlers.

The two days were broken into four sessions, two in the morning and two in the afternoon, with the same sessions running twice in the morning and twice in the afternoon of both days. I don’t think I’ve explained that too well, but the it meant there was four chances to attend almost every session. While this reduced the sensation of overwhelming choice which greeted me at my first sea symposium on Skye two years ago, but meant that there were only just enough sessions to keep me busy and interested.

Gear choice is central to expedition success, and the first session run by Ben Lawes consisted of him tipping out his dry bags and explaining what went into them and why. Since starting to paddle in dry-suits, Liz and I have wondered how appropriate they would be for an expedition, worn day after day for several weeks. We'd heard conflicting reports, but Ben had no doubts about their value. "For the first few days in Greenland we paddled with them rolled down", Ben said, "and we wondered if we'd done the right thing. But once the weather changed we were very pleased to have the dry suits". Olly Sanders, who was on the same Greeland trip later told me, "Providing you keep yourself clean you shouldn't suffer any worse rash in a dry suit". However, carried a separate set of lightweight waterproof jacket and trousers for around camp. You’ll soon be able to hear a Podcast with Olly about Noway, in particular rounding Nordkapp, the Lofoten Islands and the Fijord area.

Most sessions had a collegiate feel. The people giving the talks didn't assume they had all the knowledge so the delegates (if that's the word) could frequently contribute to the learning experience. Liz mentioned we dehydrated our own food for our 5-month PCT hike, and some was quick to pick her brains about recommended machines.

Remote first aid is always an issue which interests people who venture into wild situations. From the start Helen Barnard made it clear you don't have to be in deepest darkest wild-is-tan for the situation to be remote. The west coast of Scotland, out of VHF and mobile phone range, is wild enough. We ran through the DR-ABC basics with the 'Annie' torsos, but the upshot of that session was to leave Liz and I thinking we needed to go on a proper kayak specific course. The REC, Rescue Emergency Care courses which last 3 days, tailored for mountaineering or kayaking were recommended.

"If you've come looking for the box of free money, you're in the wrong place", was how Bob Campbell greeted us. He’s the marketing manager with P&H Sea Kayaks and Pyranha and gave an illuminating talk on how to go about getting expedition sponsorship. Given what the companies want in return, it left some wondering whether it's worth it! I've recorded a Podcast with Bob and together with a download fact sheet they'll be available on SeaKayakRoutes.com hopefully in March.

Dave Manby's talk about his “life as an expedition paddler” was, how shall I put this, less structured - yet highly entertaining. Dave was the youngest member of the 1976 Everest kayak expedition, when the team drove to Nepal, and he's been paddling ever since. Now 52, his mail still goes to his parents' address because he doesn't have a 'proper' house. After a life of shooting the world's wildest rivers and (I think) chairing the BCU Expedition Committee, no one is better placed to talk about expeditions. He hurled a guidebook across the lecture theatre with a flourish and declaimed, "If there's a guide book, it isn't an expedition!”

I was unable to confirm he was last seen in the early hours of Sunday morning, sliding down the artificial ski-slope on a tray. This was clearly a mis-identification. 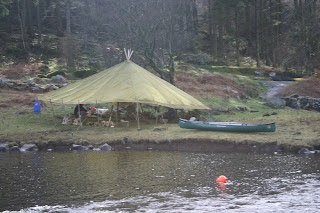 Possibly the most popular sessions were those on camp and tarp craft, run by Steven Yates, which also ventured into the areas of fire starting and open cooking. Held under a giant parachute shelter, these were distinctly Ray Mears in flavour and something no "song of the paddle" devotees would miss. This is how Liz and I spent day 2. We’ll be buying a canoe next…

Now, I'm not one for carrying axes to whittle tent pegs. What's more, we have tried tarps and found them not to our style for use in Scottish hills. Yet Steve showed how one can be combined with a regular tent or used in conjunction with paddles and a kayak to create a quick shelter. When it came to our hands-on attempt, we seized on a GoLite tarp to use, largely because we have one at home and wanted to see whether we could use it in a sea kayak context. In the end we decided it was too small for kayaking, and somewhat over-designed for this purpose. We'll try to track down an Integral designs tarp instead.

Sunday afternoon we were back in the back woods. Learning how to make fire and then cook food on it is a useful skill for any sea kayaker. It was given all the more resonance by Olly Sander’s talk the previous night, in which he’d explained his team had been forced to cook on open fires for six days in Greeland when their MSR stove fell apart. It’s worth knowing how to do it.

First tip, for hanging a pot over a fire, was to use “sheethless Kevlar” cord bought from a chandlers. It doesn't burn, and is so strong a special knife is required to cut it.

Then we were out foraging for wood and scrapings of beech bark. Once back, we were handed a fire-steel each, and sparks were flying everywhere. If it didn't catch, an un-folded make-up remover pad placed underneath was a sure piece of tinder.

Best skill of all was learning how to make "fire sticks". Using a sharp knife, we curled shavings

from a piece of wood but leaving the shaving attached. Once the whole stick was covered in these curly slivers it looked like a Christmas decoration but was a hugely effective piece of kindling, which caught fire easily and kept burning into the main wood.

The whole weekend was run with the relaxed professionalism always associated with Plas Y Brenin. Some of the speakers confided they weren’t sure they had it right because this was the first, but they’d fine tune it for next time. However, I'd be surprised if they wasn't swamped with praise as most folk I talked to had a great weekend and learned a lot.

Because although Liz and I have done a few expeditions, none have been in a kayak. So as Donald Rumsfeld might say, there were “unknown unknowns. That is to say, things we don't know we don't know." We found plenty, and while I'm sure there are more to discover, that’s the whole point of expeditions.

Excellent post, Simon! One of those, 'Wish I'd Been There' meetings where really useful information is shared around.

Thanks Michael.
Mark Tozer also posted about tarps on the UKSeaKayakGuideBook and received lots of replies.
http://www.ukriversguidebook.co.uk/forum/viewtopic.php?t=22290

A pleasure to meet yourself and your wife at the weekend.