The British Museum has the skeleton of a dinosaur hanging from its ceiling. By contrast, the bare bones of an ancestor of many of our kayaks are hanging from the girders of an old factory in Johnstone, just outside Glasgow. 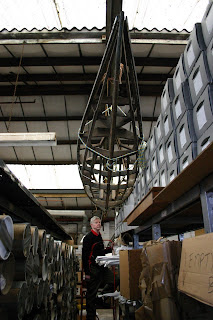 That is (or was) a 'Queensferry', designed by John Marshall of Queensferry, and identical to the boat in which Seaumas Adam became the first person to paddle solo across the Minch in 1935. He was one of the two Canoe Boys who paddled from the Clyde to the Cuillin in 1934. I would know nothing about the boat were it not for the man in the picture.

He is, of course, Duncan Winning, Honorary President of the Scottish Canoe Club, and OBE for services to kayaking.

If a kayaking encyclopedia grew arms and legs it might look like Duncan Winning, but it wouldn't be able to talk anywhere near as well. I've recorded our conversations and, as soon as it's edited, it will make a compelling podcast.

Duncan also gave me some 35mm slides of the Queensferry in action, being paddled on Loch Lomond. they came to him through the Scottish Hostelling Canoe Club.

In those days sea-canoing was a summer sport. It kept mountaineers entertained while there was no snow on Scotland's hills. Without exception, sea canoe-ists came from a mountaineering background. Sound familiar? The current rise in popularity of sea kayaking also seems to be coming from those who've previously tramped the hills.

Back to the future.

Duncan agreed to show me the boat as part of the preliminary research for a project this summer. That's why I'll also be spending tomorrow afternoon back in the archive section of the Mitchell Library, which promises to be far less entertaining.

I'll write more about this project as it takes shape.
Posted Friday, March 02, 2007

Simon, That will be a most interesting podcast.

Simon, some of these old boats are still on the water. I have paddled one fairly regularly. It is a pre WW2 Tyne folding double (of a design that was later adapted to the Commando's boat, with the addition of inflatable sponsons.) It was recovered in the 1960's, then again in 2003. It is difficult to keep up with it in a Quest. I showed Duncan this photo one of the times he was round at my house. He was ever so pleased to see that it was still being used. It belongs to a friend of mine, David from Ayr. My brother and I had an old wooden frame canvas canoe and started paddling with David in the 1960's. I was last out with him 2 weeks ago when we went from Loch Sunart across to Tobermory.

Wenley - you're right! I have to get around to the editing soon.

Douglas - you wouldn't get me in one! But it's great to know they're still on the water.