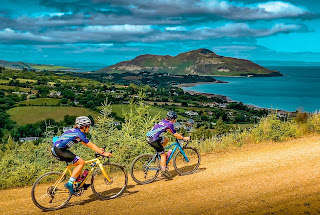 Think of it as a long weekend break with decent food, travel to a gorgeous Scottish island, camping, lots of nice people, a bit of a knees-up, a few freebies and some excellent off-road riding.

Best of all, it's a social get together.

One you start thinking of Grinduro in these terms the £150 entry fee doesn't seem too steep.  Expensive but not ridiculous.

"Scotland in miniature" is the usual cliche applied to the Isle of Arran.  Easily accessible by train (which takes bikes) from Glasgow, it's a holiday island.

Regularly used by cyclists who tackle the 56 mile circumference, it gets exceptionally busy during the summer.  It's almost quicker to ride around rather than drive.  (OK, not exactly, but you get the idea.)

There's fantastic hill-walking at the northern end of Arran with the mountain Goat Fell forming part of the Glen Rosa Horseshoe.  This provides the backdrop for the morning's cycling and lures the eye when travelling across by ferry.

Get yourself to a special parking area in the port of Ardrossen and pretty much everything is taken care of.  Bags and bike are carried to the event base in Arran High School.  There's a mini bus for the people, unless you want to ride the short but hilly distance from Brodick to Lamlash.

Camping is on the school playing fields, so no fires, cooking, alcohol or glass allowed.  Some people take campervans and there was plenty of parking, including more alongside the camping field around the back.

I didn't get full value from the package because I had to use the other Arran CalMac ferry, the one from Claonaig to Lamlash.  As it's in the north of the island, with no parking on the mainland, I needed to take my car which added £25 to the bill.  The bonus was I could carry more stuff including a small gas camping stove so I could brew-up in the car park, getting around the no cooking on the campsite rule.  This saved long queues for coffee.

You buy food Friday night, but on race-day Saturday it's all included from breakfast to lunch to dinner.  I felt the meal I bought Friday night from the catering team was much higher quality than that which was provided free the following day, so I suspect they were working to a tight budget.

There were inevitably long  queues for food and coffee from the cute Rapha coffee van.  Two people were working in it, but just one was there to make coffee, the other apparently to sell merchandise.  The latter had little to do because nasty nylon 'technical' shirts cost £65!  That's bad even for Rapha.

Now let's get to the riding.

Borrowing an idea from Enduro Mountain-biking, there is a fixed course you have to complete, consisting of 21 miles in the morning and 31 miles in the afternoon.  On that course there are just four timed sections, so actually very little racing.

You are timed around the whole thing, but there are no prizes for the fastest laps, just the four timed sections.  Oh, and the trails aren't closed, so quite a few of us had close encounters with walkers.

I don't want to give away too much, but the route doesn't seem to change much.  If you download my GPS files you could probably ride it at any time, and a damn fine day out it would be.  You'd also save some money.  Morning route.  Afternoon route.

If you're out for an overall good ride, then a gravel or cyclocross bike would probably work best.  If you're in it to win it, then a full suspension cross-country mountain bike, with lock-out shocks would probably be best.  Other more experienced riders might take a different view, and I'd encourage them to comment.

There was a good band on Saturday night and a very active bar.  I didn't see much of either.  I didn't fancy a piss-up and had an early start to get the first ferry home.

There was huge spread of ages, which surprised me slightly.  Loads of young riders, pro and neo-pro types, yet also plenty of men (and a few women) in the higher age groups.

As I understand it, Grinduro is a brand which has sponsorship at an international level from Giro.  There are four Grinduros in 2019; Scotland, Canada, California and Japan.

The brand owners get local events companies, in this case Newcastle based Focal Events (who run the Dirty Reiver) to organise their events under the Grinduro banner.   Between them they bring in event specific sponsorship, national and local.  The Arran race had Canyon is title sponsor with various other companies too, some Arran based.

They're doing something right.  Grinduro is being sold as a unique cycling experience, and riders came from several parts of Europe.  I even spoke to one lad who came from Canada and would stay on to cycle tour.

The organiser told us Grinduro California sold out in eight minutes! By contrast, I entered the Arran event at the very last minute because I was waiting to see the weather forecast.  The whole thing - camping, riding and social - would be far, far less enjoyable in a deluge.


Here's a short iPhone video, re-cut on FCP-X based on the Grinduro catchline of Maxin' & Relaxin'