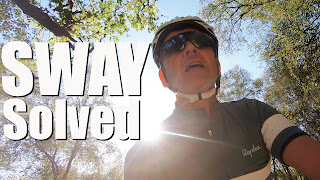 I didn't realise I had a problem until I saw the video.

In this story and video was trying to work out where it's best to carry weight in a bikepacking rig, front or back.

The answer is probably 'the middle' but I don't have a frame pack yet.

Anyway, it was watching the video of me riding away from camera that I realised how much the full, long seat pack swayed from side to side.  Indeed, I saw a cyclist recently in Glencoe and his pack was doing the same left-right jiggle.


An unpleasant outcome of this was a hole being worn in my ultralight Alpkit seat pack after just two rides!  The edge of the bolt from the saddle clamp was the culprit.  There was no effective way to fix foam onto of bolt, so I found another solution.

Well, two actually.  One was to replace the regular bolt with a dome-head bolt.  The second was to buy Alpkit's Exorail.  How did they work.  Watch the video to find out.